Adu Du is back and this time he has brought along Roktaroka who seeks revenge for the destruction inadvertently caused by BoBoiBoy on his home planet.

The episode starts when Adu Du sighed in pain as Probe treated him as a result of their defeat by BoBoiBoy yesterday. Suddenly, a warning sign appears on the control screen. A fiery asteroid headed towards Adu Du's Spaceship. Adu Du panicked and ordered to avoid colliding but they did not have time. The asteroid striked to Adu Du's Spaceship and a roar was heard making Adu Du and Probe frightened.

Meanwhile, On Earth, BoBoiBoy was helping Tok Aba with the customers and was tired. Ying, Yaya and Gopal came and greeted him. At the same time, an asteroid crashed scaring the customers away. The asteroid appears to be Roktaroka followed Adu Du's spaceship. Roktaroka asked about the evil boy who destroyed his home on Planet Volcania, Adu Du pointed out BoBoiBoy and Roktaroka proceeded to attack BoBoiBoy but was stopped by Yaya. Yaya asks him to tell what was the cause for his anger. Adu Du insisted Roktaroka to don't listen to them but Roktaroka happily accepted Yaya's suggestion.

Spoken by Roktaroka, he comes from Volcania, a hot but peaceful planet. He initially felt happy while living at the foot of the volcano. One day, Roktaroka came out of his house for a while to go to the market. Once he returns, Roktaroka can see the volcano erupting and destroying his house. Roktaroka then streams the tears of lava, then Adu Du deliberately and cunningly asks who causes the volcano to erupt. Then, Roktaroka said that he was not sure but then he could see a strange hat-wearing boy during the eruption. Roktaroka put his grudge on him and was convinced that he was responsible for everything. Since that incident, Roktaroka went throughout the galaxy to look for the boy, who apparently was BoBoiBoy.

Roktaroka was also grateful for meeting Adu Du and Probe who helped him find BoBoiBoy. But later, Roktaroka felt weird after seeing BoBoiBoy wearing his hat backward because the criminal boy was wearing a hat ahead. Gopal turned BoBoiBoy's hat forward, thus making Roktaroka angry and charge at BoBoiBoy. Roktaroka attacked with a Fiery Punch which BoBoiBoy tried to stop as BoBoiBoy Earth, but the Earth Barrier was easily destroyed by Roktaroka. BoBoiBoy turns back into normal seeing his element useless. Yaya and Ying tried to strike back but couldn't touch Roktaroka with bare skin. Gopal also fired with his power but with no use.

BoBoiBoy splited into three, BoBoiBoy Lightning, Leaf, and Wind. BoBoiBoy Lighting used his Lightning Blades but Lightning was useless against rock. Same with BoBoiBoy Leaf and Wind. Leaf's wines got burned and wind can only enhance fire. Roktaroka began to doubt that BoBoiBoy destroyed his house, because he saw that all his attacks were weak. Being called weak provoked BoBoiBoy and he turned into BoBoiBoy Fire. Fire uses Fireballs against Roktaroka but Roktaroka was left unhurt. Again, he was reminded that he can't use fire against fire. Roktaroka was about to attack BoBoiBoy but Gopal splashed water on Roktaroka just in time. Roktaroka was hurt. He charged at Gopal instead. Yaya tried to stop him saying that BoBoiBoy didn't intentionally destroyed his home, it was an accident. Roktaroka ignored and says that if BoBoiBoy destroys his home, he will destroy his' in return.

Ying, Yaya and Gopal followed him. BoBoiBoy stays there with Tok Aba and Ochobot to calm himself and try to wake his water element as decided earlier and water being Roktaroka's only weakness. Meanwhile, Yaya, Ying and Gopal splashed water on Roktaroka in order to stop him reaching Tok Aba's house. They successfully did it until there water supplies ran out. Yaya got hurt and Gopal in panick contact BoBoiBoy even when told not to. BoBoiBoy was disturbed when Gopal keep contacting him to come. Unable to find peace, BoBoiBoy went to aid his friends.

BoBoiBoy tried to use his earth element again but failed. Tok Aba reached there and have a word with BoBoiBoy. BoBoiBoy, on understanding what Tok Aba meant, was finally able to transform into BoBoiBoy Water. Adu Du insulted Roktaroka and in rage Roktaroka throw him out and attacked BoBoiBoy. BoBoiBoy Water was easily able to counter his every attack and overpower him. Water was also fascinated by natural views during their fight. Water defeated Roktaroka without breaking a sweat. Roktaroka begged Water not to harm him. Instead, BoBoiBoy apologized to Roktaroka for wreacking his house. Roktaroka, touched by his words, hugged him and made a peace treaty. 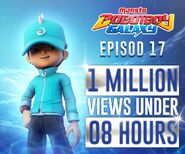 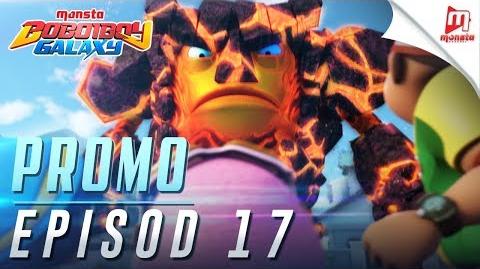 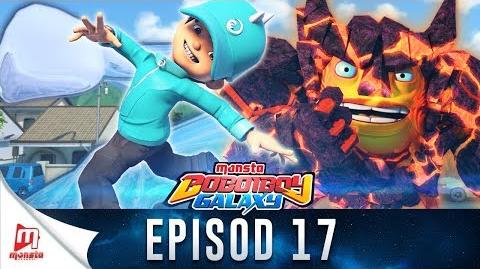