BoBoiBoy and his friends should be having a great and enjoyable picnic. But something goes wrong; their picnic is just looping and looping again. What's actually happening?

The episode begins in Outer Space where Adu Du's ship is in pursuit of an escape pod containing a Power Sphere named LoopBot. Fearful of the firing from Adu Du's spaceship, LoopBot activates hyperjump and escapes. Adu Du to follows in the same manner.

Also in space are BoBoiBoy's gang, Ochobot, Papa Zola and Commander Koko Ci, who are en route to Earth in the commander’s ship so that the Earthlings can take a well-deserved break. Though grateful for the leave Admiral Tarung has granted them, they still worry about being absent from the station in case it's attacked. Tarung responds that they are already under attack from Space Pirates, and that Fang, Sai and Shielda are the ones defending the station. He assures them it's not necessary for them to return, and dons his battle suit offscreen to efficiently destroy every hostile ship. Yaya and Ying wonder what power he used, but Koko Ci quickly closes the screen before they can see it, commanding them to prepare for landing.

On Earth, Tok Aba, Mr. Kumar, Aunty Yang and Mrs. Wawa are waiting for their children at Tok Aba's shop. Once they see the spaceship touchdown, they welcome their respective kids home with a hug. Unfortunately Papa Zola, expecting a welcome from Mama Zila, is the only one not greeted, since his "darling of justice" is at home and sent him a shopping list instead.

Papa Zola furiously responds with "In your dreams!" which Tok Aba passes on to Mama Zila over the phone. Panicked at the thought of angering his wife, Papa runs off to buy the groceries.

The rest of the kids leave with their parents and Yaya reminds them not to forget about their outing to the beach tomorrow. Yaya's mother tells her daughter that she made some delicious fried rice. This catches Aunty Yang's attention and the two start quarelling over who is the better cook so fiercely that their daughters have to drag them apart. BoBoiBoy and Ochobot glumly comment on their similarities to their daughters while Tok Aba says to ignore them and serves his grandson hot chocolate.

Meanwhile, LoopBot's pod and Adu Du's ship warp near Earth. LoopBot locates BoBoiBoy, and Probe realises he is going to ask BoBoiBoy for help. Hearing that, Adu Du fires at the pod, and a direct hit sends it crashing towards the Earth. BoBoiBoy and Cattus sees the plummeting escape pod and mistake it for a strange shooting star. He soon goes to bed after Tok Aba reminds him of the picnic tomorrow, and further nagging from Ochobot. On the beach, Adu Du and Probe search for LoopBot, having lost his signal when he crashed. LoopBot watches from afar as they head off to continue looking for him and fearfully calls for BoBoiBoy to help him.

That night, BoBoiBoy dreams about LoopBot running from Adu Du, imploring him to save him as his power is almost gone. The nightmare jolts BoBoiBoy awake, drenched in sweat and panting like he'd been running. Ochobot inquires why, but BoBoiBoy brushes it off as a weird dream. Thinking nothing of it, Ochobot pushes BoBoiBoy to get ready for their picnic.

BoBoiBoy, Ochobot and Cattus walk with Yaya to the beach. They are horrified to find out that the basket Yaya is carrying contains her biscuits, but quickly reassure her that nothing is wrong. As they continue, BoBoiBoy hears his name mentioned. He turns around and sees nobody immediately, but stares at a bush from where he thinks the sound came from. His focus distracts him from the volleyball heading towards his head, and it hits him. As the acting referee for the volleyball game, Papa Zola yellow cards Gopal for accidentally knocking him out. In the bushes, Adu Du and Probe silence LoopBot.

A flashback to a few minutes ago reveals that the events of BoBoiBoy's dream actually happened, and that LoopBot had run towards BoBoiBoy as he was walking to the beach. He called out BoBoiBoy's name, but Adu Du short-circuited him before he could call for help. As BoBoiBoy turned around, Probe and Adu Du grabbed LoopBot and hid in the bushes.

In the present, BoBoiBoy spikes the volleyball at Gopal, who counters with a dig. With the ball in the air, Papa Zola restarts the match and pits BoBoiBoy and Ying against Gopal and Yaya. Both teams use their powers in the match, and they manage to tie scores before Adu Du and Probe stop their game. He cryptically proclaims that he will beat them repeatedly using the volleyball and reveals his Loop Bracelets. Papa Zola mistakes them for fashion bracelets, infuriating Adu Du enough to kick the ball into him. He then demonstrates the power of the Loop Bracelets by invoking the Loopa Loopa Loop power and placing them in a time loop that enables him to repeatedly kick the ball into Papa’s stomach.

Yaya and Ying go to attack him, but Adu Du incites another time loop and dodges them the second time around. He and Probe proceed to immobilize BoBoiBoy's gang with the volleyball. As BoBoiBoy lies on the ground, he notices a weakened Power Sphere crawling up to Adu Du. Before he can cause another time loop, the Power Sphere grabs the bracelets and performs a Mega Loopa Loopa Loop that rewinds time all the way back to when BoBoiBoy woke up that morning. This time, he wakes up complaining of a headache instead of a weird dream, and hesitantly complies with Ochobot telling him to get ready. Adu Du and Probe are once again pursuing LoopBot as he runs to the beach, the former expressing his confusion at running after the Power Sphere again.

The rest of the events play out identically, the only difference being that LoopBot implores BoBoiBoy to remember before performing his Mega Loopa Loopa Loop. BoBoiBoy wakes and retains his memories of Adu Du attacking, but still brushes it off as a dream. As they chase LoopBot again, Adu Du realises that he's been using his power on them and yells it so while they hide in the bushes. BoBoiBoy hears the alien's voice, so he and the others investigate and find Adu Du and LoopBot hiding. LoopBot tells them his name and begs for help before refusing to give Adu Du powers and performing a final Mega Loopa Loopa Loop.

When BoBoiBoy wakes up this time, he acts on his dream by running with Ochobot out of the house. Adu Du's suspicions are confirmed, but when they capture LoopBot this time, BoBoiBoy is nowhere to be seen. The villains plan to take the power and retreat, but they're interrupted by BoBoiBoy Leaf, who is revealed to have brought Yaya and Ochobot to the beach earlier to explain the situation and lay traps for when Adu Du and Probe arrive. After the villains fall for both traps that were laid, LoopBot performs some time loops to repeatedly beat them up before finally letting the trap propel them into the distance.

Later, they bring LoopBot with them to the beach where Papa Zola asks how the robot got there. BoBoiBoy explains that it's a "long and looping" story before getting hit with a volleyball by Gopal again. The episode ends with Gopal asking why he didn't dodge it while BoBoiBoy lies on the ground complaining of a headache. 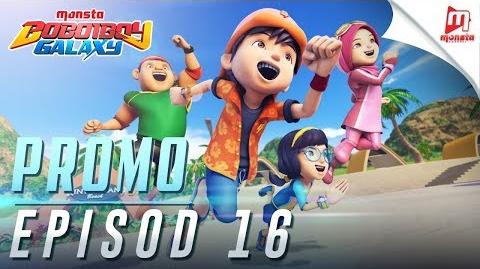 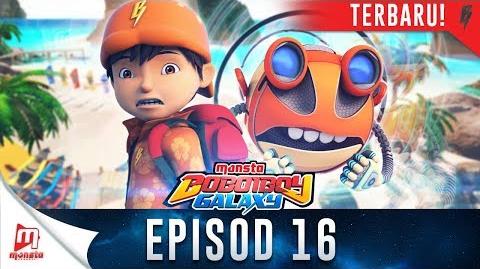