“Light of Hope” (“Sinaran Penamat”) is the 24th and final episode of the first season of BoBoiBoy Galaxy, and the 24th episode overall in the series.

As the battle of Sunnova Station wages on, BoBoiBoy fights to protect his friends from Captain Vargoba.

Following the battle from the previous episode, BoBoiBoy, who just gained his Light power, began to fight Captain Vargoba. The latter starts throwing a bunch of metal objects using all of his four arms. BoBoiBoy then uses his Light Shot attacks to destroy those metal objects. Vargoba later tries throwing one big metal object to BoBoiBoy, countered by BoBoiBoy's Light explosion that causes temporal blindness on Vargoba. At that moment, he was attacked by Fang and was sent flying into the roof of the TAPOPS station. BoBoiBoy later got mad at him and ask where he's gonna go. Vargoba starts to pull even more metal object onto BoBoiBoy but he easily dodged it by going up. He later uses Solar shot to finish Vargoba, as he is later send towards another room due to the power from the shot.

Captain Vargoba, who was defeated, was later told to be finished by Nut and Ochobot. But BoBoiBoy refuses to do so because he wants Vargoba to regret going to the TAPOPS station. He finds out about the power spheres in his back and asks what kind of misused power spheres. Vargoba refuses to tell and BoBoiBoy uses his light power to slowly removes the power sphere. While Ochobot is scanning on the power spheres, he later told BoBoiBoy to finish him quick because if he don't, he will later attract most metal object to create an armor made of metal on his body. BoBoiBoy then tries to do so, but he was too late.

Vargoba later gains his energy to fight back and in the process, a bunch of metal objects are all pulled towars him as Vargoba slowly starts to make his metal armor. Fang later tries to attack him but using his hand, who was just filled with the metals, punches Fang as he later fell down, in a weak state. He later pulls his weapon out of it's cage too as Vargoba is then equiped with all of his weapons plus his armor. BoBoiBoy uses his Light shot to try and damage Vargoba, but the attack did nothing to him as the shots are bounces back using his shield. Vargoba later uses his giant hammer to attack but BoBoiBoy dodged it but was hit a bit in the process. The power was so powerful that it can be feeled from outside.

Vargoba then tries to hit BoBoiBoy again by swinging his hammer but Tarung later came into the station and manage to hit BoBoiBoy away. He later tries to prove Vargoba that his costume would do nothing against him due to the fact that it's not made of metal. Though unfortunately he forgots about the zipper on the costume, which let Vargoba to causes the costume to be all pulled out, Tarung was later hit by the hammer and was unconcious.

In an emergency situation, Koko Ci later calls Captain Kaizo to come into the TAPOPS Station quickly, while being called, Captain Kaizo saw unconcious Tarung laying on the ground, Captain Vargoba later calls his Space Pirates to come to the station too so that they can steal all of the Power Spheres there. However, BoBoiBoy, not giving up, starts trying to fight Vargoba once more as his friends joined him to fight aswell, Vargoba later tells BoBoiBoy and all of his friends that the tough remains tough while the weak remains weak, the fight then starts once again as BoBoiBoy charges in quickly, trying to beat Captain Vargoba, his friends then came in too to accompany BoBoiBoy so that he doesn't get hit from the metal objects Vargoba can use using his Power Sphere, and since that's the case, Vargoba tries to throw most of the metal objects at BoBoiBoy but the object was later changed into food using Gopal's Food Sniper. Later, Shielda uses her shield to protect her from the metal objects, BoBoiBoy later do a triple split that consist of his Light, Lightning, and Fire power. BoBoiBoy Lightning later came into Vargoba as he uses both his swords to tank Vargoba's weapon, later, Yaya and BoBoiBoy Fire came in using their respective punches as Vargoba is the knocked into the wall of the TAPOPS Station, BoBoiBoy Light then came in and uses his maximum Light Shot but Vargoba uses his magnetic power to pull his shield back as it then bounces BoBoiBoy Light's attack back again.

Captain Vargoba then became mad at them and uses his full power on BoBoiBoy and all of his friends, he causes a tornado of magnets which then causes most of the metal objects to get thrown all over the place, one of the objects almost hit Gopal but right on time, Gopal changes the object into a rice which then prevents him from getting hurt. BoBoiBoy then gets hit by Vargoba's hammer as he's then knocked into the ground in a weak state, Captain Vargoba, who is not finished yet, later shows BoBoiBoy what he calls "True pain" as he then swings his hammer hard which causes BoBoiBoy to get hit from room to room of the TAPOPS Station, as he later gets knocked until being send to space too, Vargoba then says that that's what BoBoiBoy gets for messing with him, BoBoiBoy, in a rather weak state outside of the station, later starts freezing, however, the sun then shines towards him as he then unlocks his 2nd stage form of BoBoiBoy Light, BoBoiBoy Solar.

BoBoiBoy then starts saying that he won't make the same mistake twice as he then uses his Solar attacks called Solar Eclipse Attack. Captain Vargoba then says "Come on then!" confidently as he then witness the attacks coming straight at him. However, when the attacks are about to hit him, he loses a bit of his confidence and uses his shield so that he can bounce the attacks back, but due to him not knowing that Solar attacks are in fact, powerful, the beam which he is bouncing back from hitting him, goes through the wall of the TAPOPS Station and instead, hits every single ships of his Space Pirates. Captain Vargoba feels hot after trying to bounce Solar's shots, BoBoiBoy later leaps back into the TAPOPS Station using Solar Leap as Vargoba notice him and was shocked. BoBoiBoy uses his Multifold Solar Eclipse Attack, as it then causes Vargoba to get knocked hard into the TAPOPS Station wall, he later feels pain from the attacks as his armor, plus his weapons, are destroyed by the attack. However, BoBoiBoy was knocked out again by the recoil of his own attack, later, Ochobot tolds BoBoiBoy to stop as it's already enough. BoBoiBoy later stops his attack as he later faints. Vargoba was lastly seen as if he's dead from being hit hard by the attack. 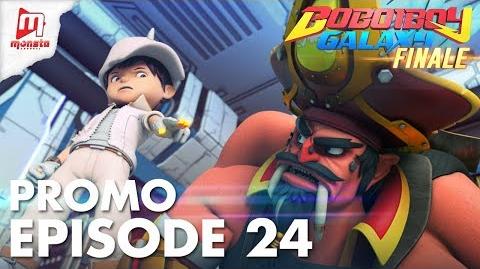 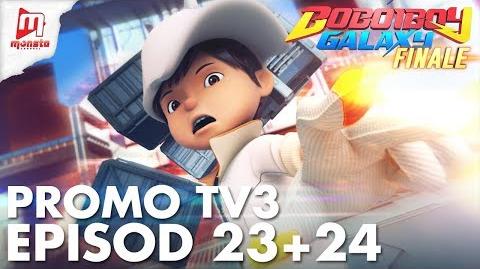 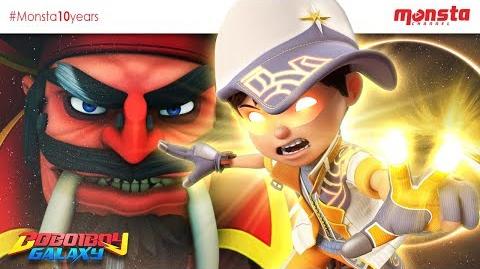