Kuputeri is the original owner of the wind elemental power.

Not much is known about Kuputeri, but she was a member of royal family who obtained the wind Elemental Power from a Power Sphera. At one point, she and the other elemental rulers fought Retak'ka, who wanted to seize their Elemental Powers. The battle ended with Retak'ka successfully seizing all five Elemental Powers.

After losing to Retak'ka, Kuputeri was rescued by her escort Marshal Maripos, and covered herself with a cocoon to treat her injuries. After 100 years of resting in a cocoon, she rose again and realized that her kingdom had been taken over by the Emperor Reramos.

Kuputeri visits Earth to persuade BoBoiBoy to give her the wind element by taking him and friends to his native planet to see the situation there. Upon arrival on Planet Windara, they are greeted by General Five, a subordinate of Emperor Reramos who acts against BoBoiBoy and his friends. Kuputeri managed to send BoBoiBoy and Fang to board the emergency pod before being arrested by General Five. 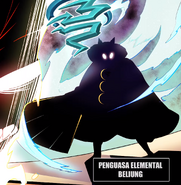 Kuputeri's appearance in the Evolution of Power comic