Jokertu is an antagonist that appears in BoBoiBoy Galaxy.

Before the events of BoBoiBoy, Jokertu was supposedly an avid card dueler, enough for him to earn the title of 'Galaxy Nusaigima's Reigning Card Dueling Champion'.

Jokertu debuts in Episode 7, where he attacks the TAPOPS Headquarters. He turned a majority of people into cards, before he is defeated in a card duel against Papa Zola. He was taken into custody into TAPOPS, having been transformed to a card himself.

In Episode 12, Jokertu is released by CardBot from being a card and was harshly interrogated, to find out how he had found TAPOPS and under what orders he was sent under. After being threatened by Tarung, he admitted that he was sent as a distraction from Panto, who is stealing the Power Spheres in TAPOPS. He was last seen being guarded by Fang, Sai, and Shielda.

He is currently a prisoner at the TAPOPS Space Station.

While Jokertu uses the cards that CardBot had given him to turn people into cards, Jokertu is also a very agile and flexible individual. He is lithe and was quick enough to avoid BoBoiBoy's attacks and catch up with them.

He is also a skilled card duelist, claiming to be 'Galaxy Nusaigima's Reigning Card Dueling Champion'. His deck is 'The Dragon's Fury' which is supposedly his strongest and most legendary dueling deck, including creatures such as The Bone Dragon, The Twin Copper Dragons, and Twin Headed Dragon.

Granted a character-appropriate power, Jokertu can transform any matter into a card. This includes objects and living things. This power is able to extend to the point that it can capture an opponent in their exact moment, seeing as how Fang was summoned onto the card battlefield laughing. Jokertu also seems to be somewhat immune to his own ability, having awareness when turned into a card.

Jokertu is a humanoid alien and has a dark skin tone, usually on his face and eyes are light blue with irises colored between purple and bright red. He wears a joker-jester styled red and yellow suit. The color scheme and style of dress is very similar to that of a circus clown, with a yellow suit and red star-shaped cloth around his neck. On his head there are two patterns on the left and right that resemble a pair of blue eyes along with a cover of the same color as his face. If you look more closely, there are small white spots on his face.

Jokertu has a creepy personality. Jokertu often shows strange behavior and is also easily mad, especially when he laughs and this makes anyone who meets him feel scared. 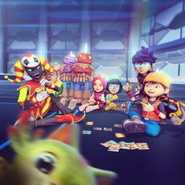 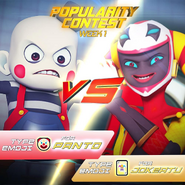 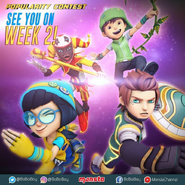 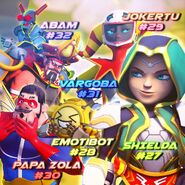