“Fang to the Rescue”

The TAPOPS Space Station is attacked and it’s up to BoBoiBoy and his friends to investigate and rescue the space station from the invader.

The episode begins with one of the TAPOPS couriers receiving a package, which he places in the storage room. After he leaves, the package unwraps itself to reveal a Power Sphera. He spits out a strange card, which glows in the dark.

BoBoiBoy’s gang are currently relaxing as they make slow progress to the TAPOPS HQ. BoBoiBoy and Gopal are bored after Papa Zola repeatedly bested them at cards and complain about the trip taking too long, but Koko Ci silences them. Since Ochobot is still resting, they are unable to utilize his teleportation ability, but when an emergency transmission arrives from the TAPOPS HQ, they are forced to ask Ochobot to teleport them.

Leaving Papa Zola, Ying, and, Yaya to guard the ship and stay behind as backup, BoBoiBoy, Fang, Koko Ci, and Gopal investigate the headquarters. Papa Zola and the others remaining on ship accidently discover a strange person in the distress transmission, raising their suspicions. BoBoiBoy's group investigates further and find numerous cards scattered around with images of TAPOPS members printed on them. They come across a mysterious figure hopping around a room. Gopal accidentally reveals it to be a maniacal alien in a clown costume named Jokertu. Fang bursts out laughing at Jokertu’s name, but Jokertu takes advantage of the distraction and captures Fang in a card. He attempts to turn the remaining members of the group into cards.

Seeing no choice but to fight, BoBoiBoy engages Jokertu in combat as BoBoiBoy Lightning, but discovers that Jokertu is also able to trap projectiles in cards. Lightning switches to BoBoiBoy Earth in hopes of trapping the clown, but the nimble Jokertu easily dodges his attacks. While BoBoiBoy attempts to hold his ground, Koko Ci and Gopal contact the ship for backup.

Unable to keep up with Jokertu's rapid movements, BoBoiBoy transforms into BoBoiBoy Leaf. Leaf temporarily keeps Jokertu occupied, but is eventually subdued and nearly knocked out before Gopal intervenes. BoBoiBoy transforms into BoBoiBoy Wind to help them escape, trapping the cards in a whirlwind. Jokertu catches up to them and moves to trap them in his cards when Ying and Yaya arrive to save them. Despite their best efforts to combat Jokertu, Ying gets trapped in a card.

Koko Ci warns the others to escape, but BoBoiBoy, Gopal, and Yaya are also transformed into cards. With the entire team incapacitated, Koko Ci asks Papa Zola to distract Jokertu while he tries to figure out how to turn BoBoiBoy and the others back. Papa Zola approaches Jokertu, calling him a 'circus clown' and challenging him to a card duel, which Jokertu accepts.

Jokertu uses his ‘Dragon's Fury’ deck while Papa Zola utilizes the ‘Disciples of Justice' deck, consisting of the cards containing BoBoiBoy's gang. Jokertu first summons a Bone Dragon, which Papa Zola counters with Gopal, turning the dragon into food. Papa Zola continues with Ying and Yaya, and they defeat the Bone Dragon. Furious over the lost of his first summon, Jokertu summons Twin Copper Dragons, which defeat Ying and Yaya. On Papa Zola’s turn, he summons Fang, who distracts Jokertu while he summons BoBoiBoy, his strongest card. Transforming BoBoiBoy to Lightning, he easily defeats the Twin Copper Dragons, but Jokertu retaliates by combining the two cards into a 'Two Headed Dragon'. Papa Zola scoffs that BoBoiBoy has 'three heads' and he has BoBoiBoy perform Elemental Split, which easily defeats the Two-Headed Dragon. During the duel, Koko Ci meets with CardBot.

After winning, Papa Zola demands that Jokertu revert BoBoiBoy’s gang back to normal, but Jokertu refuses, asking CardBot for another card. However, CardBot is revealed to have switched allegiances to TAPOPS. Koko Ci then traps Jokertu in a card, which Papa Zola body slams.

CardBot later releases BoBoiBoy’s gang from the cards. They retain only vague memories of being trapped, and are surprised to learn that Papa Zola defeated Jokertu. Fang asks about the whereabouts of Jokertu, revealing that Papa Zola is still lying on his card. The episode ends with BoBoiBoy laughing and saying his 'Awesome!' catchphrase. 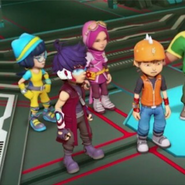 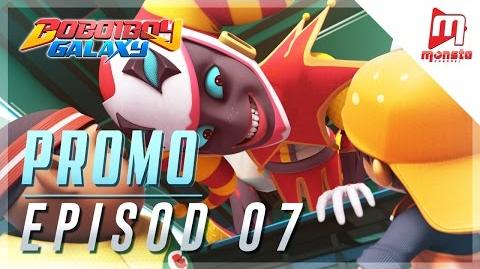 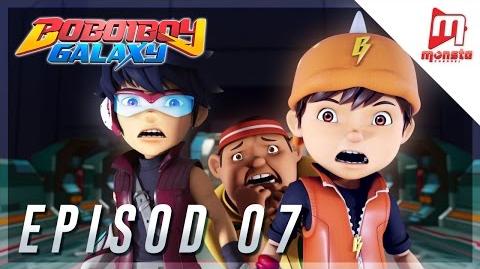