Green or red (depending on mood)

Jagara is a character who debuts in Episode 21 of BoBoiBoy Galaxy. It's a guardian robot that guard and protect the Spaceship Archives.

20 years ago, Jagara was a guardian robot that protects Spaceship Archives from any danger. When the services stopped, Jagara was only a big statue that stands in front of the spaceship while holding a book.

In The Guardian Robot, Jagara was reactivated when Gopal touched him. BoBoiBoy's gang should solve questions from Jagara so they can get into the Space Archives.

Jagara is a cheerful, friendly and kind robot who likes to help people in need. Jagara is also an easy go robot with compliments on him. But, he can be a very fierce and assertive person against someone and also very serious in his job as a spaceship keeper. 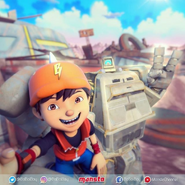 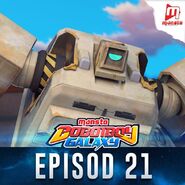