BoBoiBoy and friends must infiltrate the Pirate Colony to retrieve the Power Sphera StealthBot in order to save Sunnova Station.

The episode opens on a multitude of space pirate ships heading towards the Pirate Colony where Captain Kaizo has been working undercover as a ship cleaner. He overhears two pirates talking about how the Grand Captain wants all the ships clean before they head to the Sunnova Station.

Meanwhile, at the TAPOPS Station, BoBoiBoy is doing some research on Power Spheres, though he is supposed to be asleep. Despite the late hour, Commander Koko Ci calls him, the rest of the gang and Ochobot down to the main hangar. They find many alien mops bustling around the hangar, loading ships with weapons and making various other preparations.

Admiral Tarung explains to the gang that Kaizo has given them intel about an impending pirate attack on the Sunnova Station, a centre that collects and distributes solar energy to distant planets to provide them with an energy source and prevent them from freezing over. While the TAPOPS troops go to protect the station, BoBoiBoy's gang (along with Papa Zola and Cattus) will go undercover as ship cleaners with Kaizo at the Space Pirates Colony to retrieve a Power Sphera that the pirates might possess.

When they reach the Colony, to avoid being shot down as intruders, Fang claims them to be the extra cleaners that were requested. They are greeted by an uncharacteristically cheerful and upbeat Kaizo (under the alias "Kassim") who offers them his special "Got Grime? What A Crime!" package for cleaning their ship.

As he asks them to help him clean the ships, a huge ship passes overhead. Kaizo (back to his old self now that they're alone) reveals its owner to be the Grand Captain Vargoba, spotting the captain himself on the prow. Just before he tells them his plan to infiltrate the ship, two of Vargoba's pirates approach “Kassim”. One of them seems to be well-acquainted with Kaizo, to the point that they can make casual conversation, share a special handshake and recite his jingle off by heart, to the gang's great amusement.

Kaizo’s anger puts an end to their laughter, and he explains his plan: he, BoBoiBoy and Fang will infiltrate the ship to retrieve the Power Sphera while Gopal, Yaya and Ying keep watch on deck. Papa Zola will wait in the ship so that Ochobot can open a teleportal the moment they emerge. They enact the plan and reach the vault, which Fang opens by slipping a Shadow Tiger underneath to unlock the door. They find a huge Power Sphera they identify as StealthBot: a Power Sphera that turns specific targets invisible.

Due to its size being larger than their data indicates, they deduce that the pirates modified to enable it to cloak their entire armada for easy ambushes. On deck, Gopal suddenly needs to use the bathroom and runs into the ship to look for one. At the vault, BoBoiBoy has the idea to call Cattus and Papa Zola down to the vault to help with the extraction. Papa Zola and Cattus attempt to infiltrate the ship with poor disguises, but Cattus’ cuteness is what allows them to slip by the guards.

Once they arrive, BoBoiBoy asks BellBot to briefly detach from Cattus and use his size alteration ability to shrink StealthBot to a manageable size. 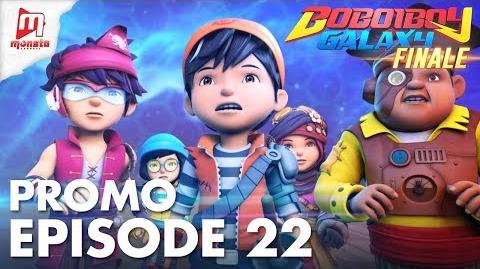 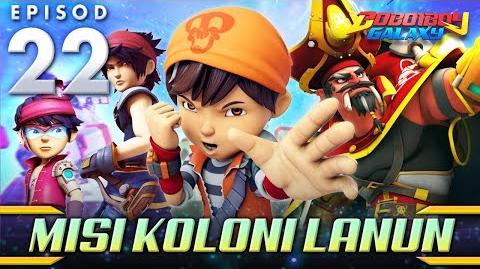