HookaBot is an evil Power Sphere who work with the Space Pirate Captain in BoBoiBoy Galaxy.

HookaBot first appeared in Episode 5, when Captain Separo uses him after finding Ochobot, MotoBot, and BellBot in Tok Aba and BoBoiBoy's Cocoa Shop. Using HookaBot, he easily defeated BoBoiBoy, who was then thrown off the Space Pirate Spaceship and fell onto a tree. Captain Separo then threatened the heroes using HookaBot, demanding them to surrender all of the three Power Spheres to him. However, he was defeated by BoBoiBoy Leaf.

In Episode 6, HookaBot was briefly seen in Koko Ci's spaceship, where it was in the room for Power Spheres to recharge. It is likely that it was deactivated and will be reprogramed by the heroes.

HookaBot's "Hook of Destruction" in Episode 5 against BoBoiBoy and Yaya 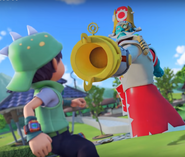 HookaBot transforms into a Cannon in Episode 5 against BoBoiBoy Leaf