Gijimo is a character and antagonist who debuts in BoBoiBoy Galaxy in the episode "Copy and Paste".

Gijimo was in the business of unlawfully pirating and hunting Power Spheras for some time prior to the series. His crimes are significant enough to warrant his name being on the TAPOPS' list of most wanted criminals. His repertoire of pirated Power Spheras include GigiBot, CrystalBot and FireBot. He also appears to be a Power Sphera hunter to some degree, given his ownership of CopyBot, PasteBot and EmotiBot.

He first appears in "Copy and Paste" on Planet Junkberg as a shifty Power Sphera dealer, sealing a deal with a customer.

Later, BoBoiBoy's Gang crash-lands on Planet Junkberg. While the boys are searching the local market for spare parts to repair their ship, Fang follows a suspicious alien down an alley, where he witnesses Gijimo selling the alien what he later discovers is a fake Power Sphera (specifically, GigiBot). He identifies Gijimo as a criminal on TAPOPS' Most Wanted list.

Gijimo encounters Fang when the latter uncovers his hideout. He prompts Fang for a passphrase, which he answers correctly, and lets him, BoBoiBoy, Gopal, and Ochobot inside. Gijimo asks who they are, and Fang lies that they are new customers looking for something costing a lot of money. The sight of cash allows Gijimo to heartily welcome them to "Gijimo's Emporium". Fang clarifies that they're looking to buy a Power Sphera, so Gijimo brings up his display racks filled with capsules that Ochobot confirms contain fake Power Spheras.

Gijimo assures them that their powers are real before trapping them in his base, having recognised BoBoiBoy as a TAPOPS member. BoBoiBoy demands he surrender himself, to which Gijimo responds by releasing the fake Power Spheras to attack them, confirming his earlier statement about their powers. During the fight with the fake Power Spheras, Gijimo marvels at BoBoiBoy’s Elemental abilities and runs back further into the base with Fang behind him.

He manages to barricade himself in a back room, but later opens the door to reveal the huge, real twin Power Spheres that he owns named CopyBot and PasteBot. He orders them to “copy” BoBoiBoy, which they do by having CopyBot scan BoBoiBoy to obtain his information, and having PasteBot produce numerous “pirated” robotic copies of him from within capsules. Gijimo, his Power Spheras and their coipes are eventually defeated by BoBoiBoy Lightning. The event led to Gijimo's arrest and he was placed in a prison cell at TAPOPS Station.

Gijimo appears in EmotiBot's flashback in the action of capturing the Power Sphera.

Gijimo really likes to hack Power Sphera with the help of both his Power Sphere, CopyBot and PasteBot to sell fake Power Sphera to his buyers for his greed. Despite his arrogance, he is also a coward. 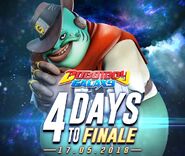 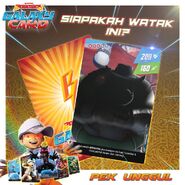