But BoBoiBoy's plan succeeded in sniffing out a cunning and cunning enemy. The battle of these two enemies takes them to a wild and wild planet: Planet Kadruax![2]

The bell rang to mark the end of a week of school at Rintis Island Academy, time to go home and enjoy the weekend. Moreover, Yaya and Ying are very excited, can't wait to review together in 'Study Night', while BoBoiBoy plans to go to TAPOPS-U to survey the Oakuat seeds bestowed by Guru Gaharum in his past adventure on Planet Rimbara.

BoBoiBoy invites Gopal and Fang to join, but Gopal refuses because he is willing to play video games at home. BoBoiBoy persuades him again with the promise of delicious food cooked by Qually, then Gopal agrees. Meanwhile, Adu Du and Probe were digging underground for three days until they managed to break into the TAPOPS-U headquarters.

In the TAPOPS-U cafeteria, Gopal tasted the dishes as if they were fried rice cooked by Qually. When asked, Qually explained that the dish was not rice but fried ants, making Gopal vomit. At the same time, Adu Du and Probe sneaked in the air ducts, spying on the conversations of headquarters residents.

Seeing Gopal disappointed with what was served, Qually apologized for just wanting to try the recipes written in Guru Gaharum's book, then asked for an opinion from BoBoiBoy who was diligently studying the book until Qually's question was answered in a confused state.

Gopal scolds BoBoiBoy for being gloomy since receiving the Oakuat seeds, signifying he is ungrateful, but BoBoiBoy refuses as he remembers Guru Gaharum's order for the seeds to be planted and cared for until it becomes a large and healthy Oakuat tree and produces a fruit that can give power latent, but must be patient because the tree only bears fruit once in its lifetime. Most shockingly, it took a thousand years to grow!

Qually suggested the use of a Power Sphere stored in the headquarters to accelerate the growth of the tree. BoBoiBoy says no one can do that, but instead he goes to ask DataBot that is being charged in the power pod. Gopal worries that DataBot is slow, but BoBoiBoy assures him that DataBot has been upgraded so that it can process data faster.

BoBoiBoy asks DataBot if there is a Power Sphere that has the power to accelerate tree growth. Immediately DataBot answered PasuBot. BoBoiBoy asks again where it is, but before he can answer, DataBot is back sluggish. Gopal acts to further amplify the charger machine to speed up the processing of the DataBot, but the power outage is so extreme that it stuns Adu Du and Probe who are peeking inside the channel!

Apparently DataBot survived the shock and spent the answer that PasuBot was found on a barren planet called Planet Kadruax, along with its coordinates. Meanwhile, Qually detects strange movements in the airways and dismantles Adu Du and Probe. Adu Du hijacks the DataBot and tries to escape by riding the Probe which switches to Car Probe mode. Qually tries to stop them by throwing a Fiery Shovel, but Adu Du responds by shooting Qually with a Laser Beam. Fortunately, Gopal managed to catch up by converting the laser to fried noodles.

BoBoiBoy plans to go on an immediate mission because Adu Du has been spying on them, and Gopal and Qually agree for fear Adu Du will also chase PasuBot and break BoBoiBoy's desire to grow the Oakuat tree and gain his new powers. Fang and Qually will stay to upgrade the base's defense system, so stay BoBoiBoy, Gopal, Ying, and Yaya who will go to the planet Kadruax to claim the new Power Sphere.

The next day, the entourage of BoBoiBoy, Gopal, Ying, and Yaya, along with Ochobot and Papa Zola, board the MYS Kebenaran spaceship to be teleported to the location of Planet Kadruax. Upon arriving at Planet Kadruax, Yaya reported that he detected a weak signal from a nearby area, possibly due to thick forests. Papa Zola complains of the difficulty of landing the ship in thick jungle conditions, so BoBoiBoy suggests that the ship be flown low-low so they can jump out.

BoBoiBoy, Gopal, Ying, and Yaya change into jungle hiker costumes while listening to a wish speech by Qually via video call. Asked why Gopal did not follow, he replied that he was afraid because his parents had warned him about the presence of vicious monsters and 'indigenous people who eat people' on the planet. Gopal is horrified to hear Qually's explanation and wants to pull away, but it's too late and he is dragged by BoBoiBoy to jump off the ship together. BoBoiBoy turns into Cyclone to help Gopal jumping.

Adu Du rides the Probe in Probey Jet mode, arriving on the planet Kadruax at the same time with the intent to steal PasuBot before it falls into BoBoiBoy's hands. After detecting the signal, Adu Du ordered Probe to land in that direction.

To land safely from the jump, Yaya and Ying perform a combination of Gravitational Pull and Low Speed, while Gopal stuck his collar on Cyclone hoverboard. Power Sphere signals intensified, detected in areas north of their current location. Yaya was amazed to see the trees around were tall and colorful, making Cyclone wonder because DataBot once said his planet was barren.

Also attracting their attention are objects in the form of red-purple and thorny seeds. BoBoiBoy and Yaya pick up some seeds while Gopal anxiously reminds them of the danger mentioned by Qually earlier. Ying who is holding the tablet gets no data about the monsters on the planet, and Yaya tries to amplify the spirit to the increasingly frightened Gopal.

Suddenly, sounds of acceleration were heard from nearby so BoBoiBoy and the others started to be alert, except for Gopal who was just howling in fear of the monster. As expected, the appearance of a "tree giant" in the shape of a dinosaur walking on two legs with a head like a flower with a three -branched tongue. Cyclone tossed the monster far and wide with Cyclone Push until it hit a tree, but many more such monsters appeared to surround and attack them!

Yaya attacks with a Gravity Punch, Ying inflicts Speed Kick, and Cyclone in turn throws Cyclone Disc. Gopal tries to overcome the fear by doing a Food Machinegun Shot, but apparently his power has no effect and he even escapes while being chased by the monster. Cyclone rescues Gopal by hoverboarding while calling Papa Zola to come to their location to help, but Papa Zola even orders him to save himself as his place is also attacked by a tree monster that is pulling his ship to the ground. Cyclone releases Cyclone Scatter to protect the entire gang from the tree monsters, while Gopal howls at Qually.

Meanwhile, Adu Du and Probe are also fighting the same tree monster. Probe was devoured by a monster, but was saved by a blow to the monster. Probe thanks Adu Du but Adu Du says it wasn't him who did it. Repeated shouts of "ja ba ja ba" were heard as the herd of monsters fled, making Adu Du feel scared. 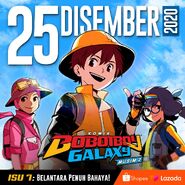 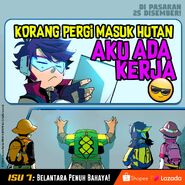 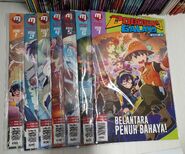 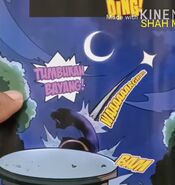