Boboiboy Wiki
Register
Don't have an account?
Sign In
Advertisement
in: Power Spheres, Tracker And Protector Of Power Spheras, Characters,
and 5 more
English

FireBot (ApiBot) is a Power Sphere which was hidden in Planet Volcania, and later stolen and sent to be used by Jugglenaut.

FireBot was a Power Sphere locked away and hidden on the peak of a volcano in Planet Volcania. Sai and Shielda were assigned to protect the Power Sphere until Yaya, Ying, and Gopal retrieved it for their Toughness Test.

FireBot was later stored in the Power Sphere Vault in TAPOPS Headquarters. However, it was stoled by Panto and was sent to Planet Circus alongside BalloonBot and CementBot.

In Episode 13, it was activated and programmed to obey Jugglenaut.

In Episode 14, FireBot was used to fight Captain Kaizo despite Kaizo still being able to overpower him and freeing FireBot, BalloonBot, and CementBot from Jugglenaut's body, thus the three of them back into Dormant Mode.

in Episode 24, FireBot appears along with the other Power Spheres in the post-credit scene. He is currently in Dormant Mode.

FireBot is a spherical Power Sphere. It's entire body red while its head and both round iron on its left and right are yellow. FireBot has a mouth that is sewn with gold irons and a mouth that does not seem to be able to move. The round iron on the side has a small hole that is for FireBot to remove a pair of his hands, yet it is never removed as it is never activated to move on its own. His eyes are orange like a burning fire.

Because FireBot lives in an extreme fire environment called Planet Volcania , it is capable of generating several types of power from fire. This power of fire is used by the Jugglenaut in Dark Circus. 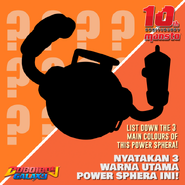 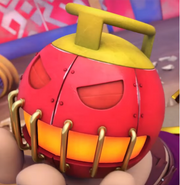