Fang to the Rescue

Fang to the Rescue

“BoBoiBoy Leaf VS The Pirates”

With the Koko Ci's Spaceship fixed, the team is now on their way to the TAPOPS Headquarters but encounter some trouble along the way.

The episode begins with Koko Ci announcing on a stage that the TAPOPS spaceship has finally been repaired. He thanks Tok Aba for taking care of him and MotoBot while on Earth, saying that TAPOPS would be eternally indebted. He then rallies BoBoiBoy’s gang, and prepares to go to space through one of Ochobot’s portals. Tok Aba gives BoBoiBoy his blessing and the two bid farewell. Papa Zola tears up while saying goodbye to Cattus.

The team departs and Koko Ci tours the new TAPOPS members around the ship. They see the Power Sphera charging room (where the Power Spheras and Cattus promptly relax and recharge), as well as their new rooms. Ying and Yaya's room proves to be luxurious and spacious with an incredible view of Outer Space, but since BoBoiBoy and Gopal are cadets, their room resembles a supply closet. Although Gopal is distraught over such a measly room, BoBoiBoy is just thankful to have a room to sleep and rest in.

As they are settling down, the ship suddenly quakes. Ying hurries the others to the control room, only to reveal that Papa Zola had stowed away on the ship, not wanting to be separated from Cattus. However, they suddenly crash into an abandoned ship, which wakes up MotoBot. It is revealed that Papa Zola had altered Koko Ci’s safe, predetermined course in favor of a much quicker route, albeit through a dangerous forbidden zone. The area turns out to be the nesting and hunting grounds of dangerous space mosquitoes, which suck the energy out of ships that wander into their territory.

The mosquitoes start to suck the ship dry of energy but with MotoBot’s help, BoBoiBoy and his friends are sent out to take care of them. Meanwhile, Koko Ci goes to the Engine Room, trying to activate the solar panels to regain some of the energy lost and send out an SOS signal. Although they make quick work of the first round of mosquitoes, more show up in their place and BoBoiBoy is forced to engage them in combat once again.

Help soon arrives in the form of a ship revealed to be piloted by Fang, having heard the distress call while doing a solo flight training. After destroying the remaining mosquitoes with his shadow manipulation, Fang greets his old friends. Unfortunately, they can't stop laughing at Fang's mushroom-like safety helmet. Despite the others' mocking comments, he insists that the design is "the latest trend!" MotoBot and Koko Ci mistake them for "catching up on old times".

More mosquitoes arrive and BoBoiBoy invites Fang to partner up like old times. BoBoiBoy performs an Elemental Split and Fang summons his Shadow Falcon and the two begin to battle the incoming bugs. Seeing more bugs incoming, BoBoiBoy reverts and he transforms into his new elemental form Leaf, who makes a passing comment on Fang's appearance, much to Fang’s rage. BoBoiBoy summons pitcher plants, who begin to gobble up the bugs. Following in his suit, Fang summons his own Shadow Venus Fly Trap and the two's plants manage to devour the bugs. They finish off the bugs and they congratulate each other on their victory.

However, their victory is cut short when a much larger mosquito appears. Leaf being a scatterbrained that he is, attempts to make his plants devour the bug, much to Fang's dismay, but it's too big and it easily tosses BoBoiBoy aside. It goes in for the final blow, but the TAPOPS spaceship catches the mosquito with it's solar panels, much like a fly swatter, revealing Papa Zola being the one in control. He manages to destroy the last large mosquito and the coast finally seems clear.

Papa Zola is later promoted to a TAPOPS captain for his act and joins them on their galaxy adventure. They also thank Fang for his assistance and for towing their ship towards their destination. However, Papa Zola’s mocking of Fang’s helmet irritates him, and he starts rocking the ship around, making it collide with nearby asteroids. Those onboard the TAPOPS spaceship plead for Fang to stop while Papa Zola remarks that he's starting to feel dizzy. 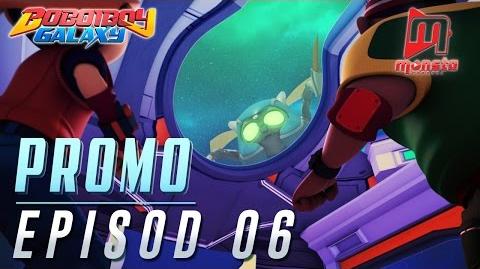 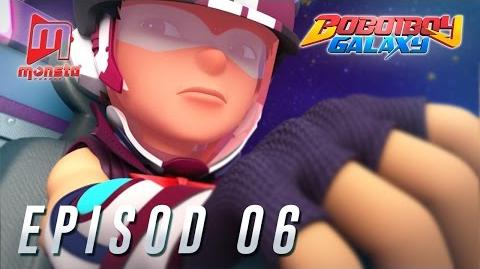