Everybody Loves BoBoiBot (Bahagia Bersama BoBoiBot) is the 18th episode of Season 3.

The police and Mr. Mat were chasing Pango Robot who stole Mr. Mat's burgers. Then, Rob and Robert asked Roberto why did they steal burgers instead of money and he said they needed to eat. Then, BoBoiBoy Cyclone is seen chasing them and Roberto tells Rob and Robert to use maximum speed. BoBoiBoy transforms into BoBoiBoy Thunderstorm and uses lightning speed to chase them. BoBoiBoy can't find Pango Robot anywhere after he hides himself behind the trash. But, when Pango Robot try to run away, the police and the Mr. Mat found them and Pango Robot quickly tries to run away but the police chase them with their car. But when they almost get out, many police cars and Adu Du surround them. Rob, Robert, and Roberto were surprised when they saw him.

Adu Du (known as Kokomander Koko) told Pango Robot to stop and they got surprised, wondering why Adu Du tell them to stop if he is their gang. Robert got angry because he thinks Adu Du has betray them and he thinks he is just used them. Roberto tell them to stop Adu Du with Pango Robot. But when they got closer, Adu Du laugh evily and suddenly BoBoiBot Fire come, then attack them with Fire Ball 2.0. Pango Robot got destroyed. Then, Rob, Robert, and Roberto and the burgers thrown to the sky and BoBoiBot catch the criminals and throw them to the police car. The police and Mr. Mat say thanks to Adu Du and BoBoiBot and many resident admires BoBoiBot. Roberto inside the police car got angry at Adu Du for betraying them and used them all the time, then the car leaves. Everyone left except Adu Du and BoBoiBot.

Later, BoBoiBoy Thunderstorm come and feels so tired because of chasing Pango Robot. Then, Adu Du and BoBoiBot mocking BoBoiBoy because he did come late. BoBoiBot remind Adu Du to back to the headquarter. After that, BoBoiBot and Adu Du fly to the sky.

At the Cube Fortress, Probe is cleaning the room where BoBoiBot was tested. Adu Du and BoBoiBot suddenly enter the room and flying around the room, making the room dirty again. Adu Du blamed Probe why he did not cleaned the room and Probe trying to tell that he already cleaned the room till Adu Du made it dirty again. Then, BoBoiBot transform into BoBoiBot Cyclone and clean the room in few seconds. Adu Du is impressed but Probe is surprised. Adu Du says that BoBoiBot is his best robot, then Probe got jealous and trying to get Adu Du's attention. Adu Du then tell Computer to show popularity rating of BoBoiBoy and BoBoiBot, and it show that BoBoiBot's popularity rating is going higher but the residents still like BoBoiBoy more than BoBoiBot. Adu Du got angry and told BoBoiBot to help more people so BoBoiBot will be more popular than BoBoiBoy. Probe later come back and bring 2 glasses of water for BoBoiBot and Adu Du. Adu Du got very angry at Probe and said that BoBoiBot can't drink water and thinking that Probe is trying to sabotage BoBoiBot. Probe cries then Adu Du left with BoBoiBot to help more people. Probe later thinking something when he see water puddle.

1 week later, the P.P.P.P.R is over and Ravi and Papa Zola announced the winner in on TV. And the winner is BoBoiBot. Papa Zola give a congratulations to BoBoiBot and wills to forgetting BoBoiBoy. Then, Gopal called BoBoiBoy and might be feeling sad with. Ochobot suggests them to be playing a video game. Gopal denied because he did not complete his homework yet. But, suddenly BoBoiBot came behind Gopal. BoBoiBoy got upset and Gopal tell that his father did call him to repair his home that got destroyed by Mama Zila. BoBoiBot came and offer to complete Gopal's homework. Gopal's very happy but later BoBoiBoy ended the call. BoBoiBoy then goes back to his bedroom and continues feeling sad.

BoBoiBot repaired the broken roof after Mama Zila transformed into the monster. Mr. Kumar and Gopal said thanks for repairing his home for free. But suddenly, BoBoiBot said that's paid. Gopal and Kumar said they will not pay. And BoBoiBot transform into BoBoiBot Fire then destroy their roof and burnt Gopal's homework book. Gopal call BoBoiBoy about what happened but later, Yaya, Ying, and Fang call BoBoiBoy at same time. Ying says that Adu Du is revealed his true evil plan. Yaya says if people are not willing to pay, BoBoiBot will attack and punish the persons. And Yaya gave a story to BoBoiBoy about that. BoBoiBot cutting grass at Ah Beng's son home and must pay RM 1,000 but he didn't want to pay then BoBoiBot attacked him with the Lightning Kris 2.0. Then, Canteen Lady just complete to repair her chicken coop. Then, BoBoiBot destroy and rebuild her chicken coop. And Canteen Lady must pay RM 3,000. The Canteen Lady fainted. she must pay a total RM 4.500. Gopal says to BoBoiBoy he need to to destroy BoBoiBot, because he is the only one that can defeat BoBoiBot. But BoBoiBoy denied because he thinks BoBoiBot has no weakness. Later, Probe came to BoBoiBoy's window. And Probe introducted himself as "Mr. Sabotage Hobe". But to no avail, Ochobot already knew he is Probe. Probe came to give an information about how to defeat BoBoiBot.

2 weeks later, Rintis Island's citizen pay to the Force Donation Box. Adu Du scream at joy because he is rich. Then, BoBoiBoy says to stop his evil plan. But, Adu Du and BoBoiBot began mocking BoBoiBoy again. But now, BoBoiBoy believes that he can defeat BoBoiBot. Finally, BoBoiBoy transformed to BoBoiBoy Water. 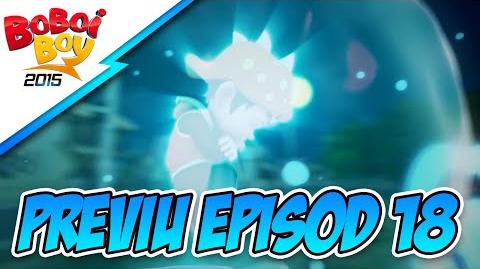 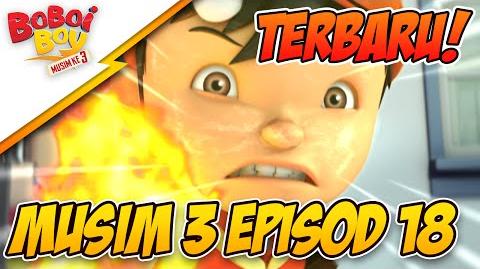