BoBoiBoy finds everyone on TAPOPS Space Station behaving strangely, and the culprit behind it is closer than he thinks.

At the TAPOPS Space Station, Commander Koko Ci and Admiral Tarung were inspecting the artificial Power Spheres that was successfully seized from Gijimo on Planet Junkberg. Tarung finds that one of the Power Sphere is not artificial, so Koko Ci takes a closer look and finds that it is inactive because his energy is not enough. Koko Ci installed a charger wire on it and waited. Suddenly, it glowed.

A few hours later, Ochobot tries to awake BoBoiBoy and Gopal in their bedroom because it was almost 7 O'clock. When the clock shifted at 7 am, Tarung which was supposed to be vicious but he suddenly softened on them, and tells them that commander to wait for them on the main deck. BoBoiBoy and Gopal were stunned for a moment, but Ochobot pushed them to take a shower and get ready.

BoBoiBoy and Gopal walk towards the main deck and greet Koko Ci who has been waiting for them for a long time. Koko Ci scolded them for falling asleep and being late for no apparent reason. He starts talking very emotionally and tells them to go. Ochobot and BoBoiBoy felt something had happened. Fang ran towards them in exhaustion, did not have time to finish the words feeling nauseous and rushed to the bathroom while pointing towards the evidence room. BoBoiBoy, Gopal and Ochobot hear the voices of people singing and see Yaya and Ying dancing and singing merrily. Ochobot tries to tell them to stop but Fang comes and says they can't stop themselves. Then Ochobot scanned the evidence room and found a Power Sphere, EmotiBot.

BoBoiBoy tries to approach him but EmotiBot tries to hide. Ochobot scans it for information and finds out EmotiBot is a real Power Sphere and can manipulate emoti. Gopal tries to catch him but is instead manipulated into a bimbo by EmotiBot. EmotiBot warns them to stay away from it if they do not want to be like Gopal. Fang returned for a moment, but upon seeing Gopal immediately ran to the toilet. BoBoiBoy felt angry and used wind power towards EmotiBot to drop it and make Gopal normal. EmotiBot again manipulate Gopal who was approaching to catch him, then BoBoiBoy Fire releases Fire Ball causing an explosion. When the smoke subsided, they saw Tarung.

BoBoiBoy tries to apologize but Tarung said that it was nothing. Suddenly, EmotiBot manipulates Tarung again giving him an anger emoji. Tarung attacks BoBoiBoy and Gopal using his Battle Suit. The duo was barely saved by Ochobot just on time. Tarung started punching the door but the door was too thick. Meanwhile, in the store room BoBoiBoy, Gopal and Ochobot were hiding from Tarung admitting that they can't fight him face to face. The same time Fang appeared, on asked he told them what happened in the morning; he, Yaya and Ying were going towards the Evidence Room to assist Commander and Admiral, but when reached they saw that there was no one in the room except for a Power Sphere. When they got near him then it suddenly activates and manipulated them, since then he is feeling like throwing up, and Yaya and Ying were behaving like dance freaks.

After Fang's story, they noticed Admiral Tarung in the room. The team has a great chase upon escaping from Admiral Tarung, ending up in the Evidence Room again. Ochobot told BoBoiBoy and Fang to pluck out the cable from EmotiBot so he shut down. Fang pulls the cable by using Shadow Fingers and BoBoiBoy transforms into BoBoiBoy Leaf, and caughts EmotiBot with Vine Whip. Suddenly, someone enters the room. Ochobot scans the area and reveals that Admiral is back. When the smoke subsided, Tarung us revealed wearing his Katakululu Battle Suit. Without giving BoBoiBoy and Fang time to act, he hypnotized them by using Hypnosis Glare Katakululu and ordered them to get rid of Gopal. Hypnotized, BoBoiBoy and Fang started coming towards Gopal. Gopal started lying in panick. Ochobot told Gopal to lie away more. Gopal started a series of lies and his nose started growing longer and longer. Then he attacks with Liar Nose Slam causing the cable to come out. Everyone turned back to normal again. EmotiBot begs not to harm him before shutting down completely, but suddenly BoBoiBoy attached the cable back. Angered, Tarung question that he want him to attack them again but BoBoiBoy said that EmotiBot didn't mean to attack them he was just afraid of them. The episodes end when EmotiBot was seen happy that he is now in safe hands. 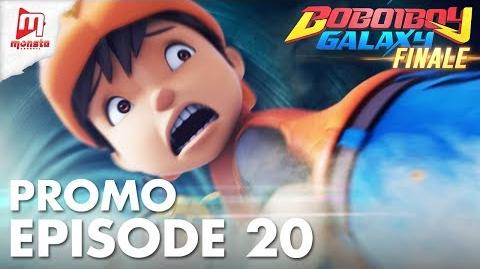 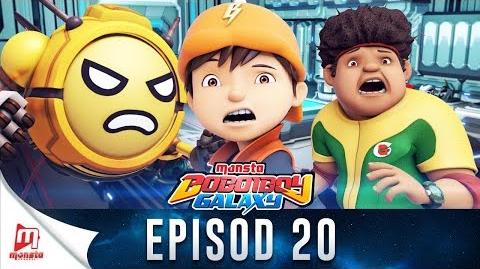