Danger: BoBoiBot (BoBoiBot Bersedia) is the 17th episode of Season 3. BoBoiBoy confronts with BoBoiBot for the first time.

In Cube Fortress, Adu Du starts the last test of BoBoiBot by having Mega Probe shoot BoBoiBot. During the test, BoBoiBot dodges and attacks Probe with Lightning Kris 2.0. Probe gets electrocuted and falls, which marks the test a success. Adu Du praises BoBoiBot and prepares to get to BoBoiBoy. Probe gets jealous of BoBoiBot because Adu Du says that BoBoiBot is his best robot.

Meanwhile, at school, a sleep-deprived BoBoiBoy walks into his class and is greeted by Gopal, Yaya, Ying, and Fang. He claims to have turned into BoBoiBoy Fire five times the night before, but was promptly stopped by Ochobot throwing water at him. Ying tells BoBoiBoy to be patient or he will not be able to control BoBoiBoy Fire, but he cannot get out of his thoughts. Yaya argues that it's not BoBoiBoy's fault, but he denies because he is indeed BoBoiBoy Fire. Suddenly, Cikgu Papa comes and asks about what is being discussed. Yaya distracts him by prompting a morning class greeting and receives a thank from BoBoiBoy.

The school field has been burned, so Cikgu Papa has to replace subjects. Gopal suggests the current subject being replaced by a break in the cafeteria, while Fang suggests a "Feet Shaking Class". Both of them are then punished. Cikgu Papa will replace Sports with math subjects and mathematics will be held 10 times a week. All the students are shocked, except Ying and Yaya - who on the contrary are very happy. Also, mathematical exams will start because the test papers were burned on the previous day.

During the walk home, Gopal finds a strange poster. It turns out that Adu Du has made about an invitation to find out who the Fire Criminal is at about 2:00 p.m. While in field, the Rintis Island's citizens are assembled. BoBoiBoy and friends come to the field just in time demonstration begins. Adu Du appears on stage and later points to BoBoiBoy as the Fire Criminal. The citizens are shocked. BoBoiBoy then admits to everyone and apologizes. The citizens are unsure, and BoBoiBoy's friends are defending him, until Adu Du plays the videos from the previous episode for proof. Adu Du suggested searching for new heroes, since BoBoiBoy is already too tired to help people. Adu Du introduces BoBoiBot and promotes him as the new hero. As he introduced to him, the clouds became dark and he is introduced to the citizens.

Fang is furious and summons his Shadow Tiger. BoBoiBot shields himself with the power of earth. Then, Gopal attacks by trying to turn the robot into food. BoBoiBot turns into BoBoiBot Cyclone and issues a Hurricane Twister 2.0, which has more power than BoBoiBoy's. Gopal's attack is deflected and hit multiple nearby objects, including Papa Zola's car and turn them all into food. Gopal proceeds to flee the scene in order to escape Papa Zola's wrath, but Adu Du orders BoBoiBot to chase after him. BoBoiBot takes on his BoBoiBot Thunderstorm form, uses Lightning Speed 2.0 and catches Gopal. Just when Gopal is about to be finished, BoBoiBoy creates a barrier to protect Gopal, but BoBoiBot quickly leaps over it.

BoBoiBoy Quake then summons the Earth Golem, but BoBoiBot turns into BoBoiBot Quake and summons his own Earth Golem, dubbed 2.0 and destroys the former. BoBoiBot provokes BoBoiBoy many times, including saying his own catchphrase "Awesome", which makes the latter deeply depressed and angered, to the point his unstable emotions threaten to turn him into BoBoiBoy Fire. Noticing the situation, Adu Du orders BoBoiBot to keep provoking BoBoiBoy until he really takes up the transformation. His full transformation worries all his friends, as he still cannot control his fire powers yet, and he immediately attacks Adu Du and Probe with a Fireball when noticing them hiding behind a box. BoBoiBot is then ordered to attack BoBoiBoy. BoBoiBoy Fire attacks the BoBoiBot with several Fireballs, but as his powers are uncontrolled, the balls hit almost everything nearby, including the citizens' houses and the islanders themselves. BoBoiBoy Fire creates a Fire Shackles and successfully holds BoBoiBot in place. BoBoiBoy Fire puts out maximum fire power, heating the atmosphere nearby. Because of that, he continuously laughed until BoBoiBot turns into BoBoiBot Fire 2.0 and breaks free from grasp, and creates a Giant Fire Ball 2.0, whose heat even BoBoiBoy Fire cannot endure. He then has to return to his original self and fainted.

After the battle has ended, Adu Du says to everyone that BoBoiBot can be a better hero because he can control his fire powers. Agreed at once, all the Rintis Island's citizens puts BoBoiBot on the pedestal and praising him, replacing BoBoiBoy, forget about him and left. The episode ends with BoBoiBoy saying he can harm other people, and left saddened. 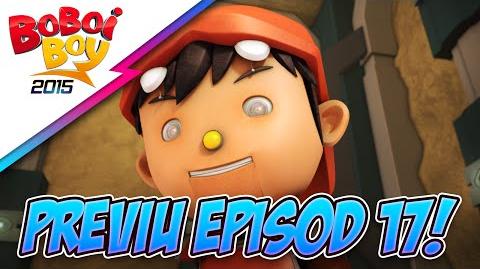 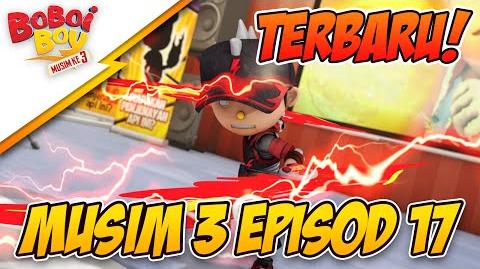