BoBoiBoy Galaxy: The Unraveling of Secrets

Crystal Spider first appeared in the extra episode of BoBoiBoy Galaxy: The Unraveling of Secrets. It is a type of purple spider that lives on Planet Oroq.

BoBoiBoy Galaxy: The Unraveling of Secrets

The Spider's voice was first heard after Sai, Shielda and BoBoiBoy arrived at the Roqu village. The Crystal Spider had captured Roqu villagers and was planning to make them his meal. BoBoiBoy launches an attack on him, with Sai and Shielda also attacking him with chaotic attacks. The Spider then calls them his food, which makes them begin thinking about how their attacks could be effective. He was then attacked by BoBoiBoy Earth and Leaf and was then shot by BoBoiBoy Lightning until he lost consciousness. The people of Roqu were rescued by BoBoiBoy, Sai and Shielda, but it is unknown what happened to the Crystal Spider after that.

The Crystal Spider is purple in color, with a green back and green crystals on his body. He has one eye and is eight feet long. The irises of his eyes are also green.

The Crystal Spider speaks in a way that annoys anyone who hears him. He extends the sound of an 's' into a 'sssss' in his speech. 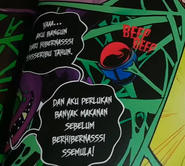 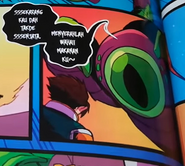