BoBoiBoy Solar, BoBoiBoy Thorn, and Ying are in the Steel Pyramid, where the Power Sphera PasuBot is stored. However, BoBoiBoy Thunderstorm, Gopal, and Yaya are still looking for a way to escape to avoid becoming prey to the Tumbosaurs.

Can they save PasuBot before Adu Du and Probe? Or did Adu Du manage to acquire the Power Sphera and release the latent power within him?

Night turns to day, and BoBoiBoy Thunderstorm, Gopal and Yaya were buried up to their neck. They were to be sacrificed to the Tumbosaurs by the Baja Tribe on the orders of Adu Du, which were given a day ago. They were still struggling to escape and at the crucial moment the Tumbosaurs started to wake up from their slumber, Yaya used her remaining energy to do a Gravitational Lift and managed to break the ground, letting the three of them escape.

Meanwhile, BoBoiBoy Solar, Thorn and Ying were still looking for the entrance to the ancient pyramid in the middle of the forest. They were contacted by the other group, with Yaya informing them that Adu Du and Probe were heading to their location. In a state of near stupor, Thorn and Solar tried to find a way to open the door. Jokingly, Thorn recited a spell to open the door, while Solar solved calculations to find the secret code to turn the ‘lock wheel’ like a vault door before realizing that it was a wheelbarrow wheel that has nothing to do with the door. They started to mock each other to the point of causing a small fight but it was broken up by Ying.

Coincidentally, light started to shine on the door as the sun rose, making the roots creeping around the door start to move. It turned out that the roots were also a plant creature that slept at night like a Tumbosaur. At Ying's suggestion, Solar opened the door wide enough with Solar Rays, with help from Thorn with his Thorn Pillars to hold the door. Upon entering, Ying praised Thorn and Solar for being able to work together after cooling off, and the three of them met another door with a keyhole in the middle. It was compartment-shaped, with two more small compartment holes in it.

At the same time, Adu Du and Probe storm into the pyramid and fire lasers at the three of them. Since the pattern of the second door hole is similar to the pattern of Adu Du's head, Probe rushes to insert Adu Du's head into the hole to open the door. The door is successfully opened, and Probe tells them how to open the door but Adu Du silences him. They ran into the pyramid and Probe fired rockets to tear down the door area to block Solar, Thorn, and Ying.

Ying managed to do a Slow-Mo Speed to slow down the collapse so that the three of them managed to get behind the door, but the collapse blocked the light and caused darkness. Solar lights the Solar Ball to illuminate the situation; at the same time, the arrival of the group Thunderstorm, Yaya, and Gopal where Gopal turns the walls into cream biscuits. Then all the team met again, and Thorn, Solar, and Thunderstorm reunited into one .

The team is now in a hall full of colorful carvings that tell the history of Planet Kadruax and the Baja people who experienced a protracted drought (confirming DataBot's knowledge that the planet was once barren) until the emergence of the Power Sphere PasuBot that re-fertilizes the planet to grow forests thick, carried by a green-skinned creature of unknown appearance (because it was erased due to a crack in the wall and was possibly Kubulus).

Adu Du's voice was heard shouting to celebrate the victory, so the team rushed there to find that Adu Du and Probe had found PasuBot lying on the table in the middle of the pyramid. Before BoBoiBoy could stop Adu Du from touching the Power Sphere, Adu Du installed a switch on the table next to PasuBot to lower the bracket to prevent BoBoiBoy's progress. BoBoiBoy asks why they can enter the pyramid so easily; Adu Du replied that the pyramid was built especially for his people, the Kubulus people, to their surprise at the Baja tribe's kind treatment of Adu Du.

Adu Du proudly opens the container that holds the PasuBot and is ready to use it. BoBoiBoy scolds Adu Du for not being worthy of using it, and Probe responds with the statement that his boss deserves it because his people once served Planet Kadruax and its inhabitants, making BoBoiBoy feel furious. PasuBot wakes up and considers Adu Du as his master. BoBoiBoy tries to persuade PasuBot to disobey, while Adu Du tells Probe to prepare an ‘Oakuat seed’. After being shown his seed, PasuBot felt something was wrong and tried to ask Adu Du to wait, but Adu Du hurriedly put his seed into PasuBot.

So the inserted seeds were processed in PasuBot's body, but the result turned out to be beyond Adu Du's expectations when the creeping branches grew fast from PasuBot. Yaya remembered that the prickly purple seed was the original seed he had once collected for later study, and not the Oakuat seed that Adu Du had suspected. Before Adu Du realized his mistake, he finally formed a tree monster with a thorny thick shoulder - called Alpha Tumbosaur by Gopal. Then everyone ran away, but Alpha Tumbosaur caught and ate Adu Du and Probe then turned to the gang.

Blaze turns to Thunderstorm and performs Lightning Acceleration to rush towards where PasuBot is stuck on the monster's body. Before Thunderstorm could make a cut, his legs were wrapped by creeping leaves. Yaya immediately acts by applying Gravity Lift to paralyze Alpha Tumbosaur. Gopal also helps by firing Ice Tea Shots towards the monsters to smooth the leaves so that Thunderstorm escapes and perform Lightning Strike to release PasuBot from bondage. Once released, Thunderstorm throws PasuBot to Gopal and tells all his friends to run away from the Alpha Tumbosaur, assisted by Ying with High Speed Run. Thunderstorm is stuck in the path of the monster's shoulders and turned back to normal, had time to greet Adu Du and Probe who were trapped in the leaves while the monster went hunting for the others.

Gopal, Yaya, and Ying ran up the stairs to the top of the pyramid and contacted Ochobot at MYS Kebenaran, but coincidentally the spaceship arrived there to greet them after being freed from the grip of creeping roots yesterday by Papa Zola. At the same time, Alpha Tumbosaur crashes into the top of the pyramid and captures MYS Kebenaran, making Papa Zola come back anxiously threatened by the ‘Vegetable Monster’ once again. Adu Du and Probe seem to be willing to become giant 'fertilizers', but BoBoiBoy tries to escape by splitting into two, Solar and Thorn. Ying sighed seeing this elemental coupling again and begged them not to quarrel. Thorn and Solar guarantee that won't happen, then do Elemental Fusion to be BoBoiBoy Sori.

Adu Du asked why Sori's name, and he replied 'I'm sori if you got hit once' while attacking with Thorny Sori Swipe to blow up Alpha Tumbosaur's body. As a finishing attack, Sori incarnates a giant flower tree-shaped board to emit a Thorny Sori Shot to destroy the monster, thus unleashing Adu Du and Probe. Adu Du and Probe thank Sori, but Sori points his power at them anyway, making them rush to run away without realizing that Sori is just messing with them.

BoBoiBoy and his friends safely boarded MYS Kebenaran along with PasuBot. PasuBot thanks BoBoiBoy for rescuing him and is willing to help him. BoBoiBoy wished to grow Oakuat seeds, and that wish was fulfilled. The chapter closes with an incident that took place far from BoBoiBoy’s location, inside a cave where a formidable white creature came out of a cocoon in front of witnesses. 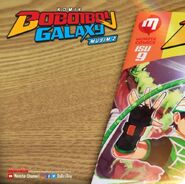 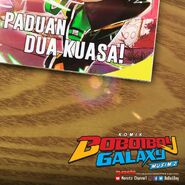