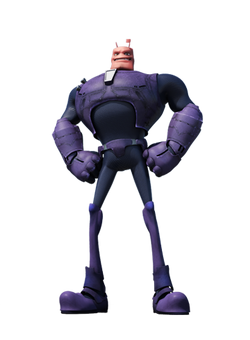 Bora Ra is an alien from Planet Ata Ta Tiga. He is the leader of The Tengkotak gang and he makes his debut in BoBoiBoy: The Movie as the main antagonist.

Sometime before the events of BoBoiBoy, Bora Ra went to Planet GogoBugi to get the Power Sphera EnerBot. He tries to force the planet's governor (who is also Fang and Kaizo's father) to hand the Power Sphera over. When he refuses, Bora Ra attacks him with his Black Hole power, incapacitating him. He orders Gaga Naz to search the entire house for EnerBot.

Soon after, Bora Ra encounters the governor's wife, who entrusted EnerBot to her sons and instructed them to flee the planet on a spaceship. He intercepts the boys as they reach the tower with their escape ship and realises that Fang is in possession of EnerBot. He snatches it from them and remarks how careless their parents’ are to burden their children with the responsibility of guarding a Power Sphera.

Kaizo attempts to recover EnerBot, but Bora Ra swats him away and prepares to punish his stubbornness with the same Black Hole attack he used on his parents. However, he's briefly distracted when Fang bites his leg. He kicks him off, but Kaizo, in his rage, activates EnerBot, which Bora Ra dropped when Fang bit him. Furious at someone else obtaining the power, Bora Ra attacks Kaizo with a Black Hole shot, which the boy manages to fend off with his new energy manipulation abilities. As they fight, Bora Ra creates a small black hole and dangles Fang in front of it, threatening to drop him if Kaizo doesn't stop. However, as Fang struggles in his grip, he releases him anyway.

Though Fang manages to grab a pole before he is lost, Kaizo is no less furious and loses control of his power. Lasers fire from him in all directions with the intent of striking Bora Ra, but one stray shot hits Fang’s hand, and he releases the pole. Fang’s cry for his older brother is enough to bring Kaizo to his senses and jump in to save him.

Kaizo immediately rescues him, and before Bora Ra can attack them, Admiral Maskmana appears and rescues them. Maskmana activates the Silver Mask to fight Bora Ra and uses the Silver Blade to split one of Bora Ra's antennae. Finally, Maskmana and Kaizo while carrying Fang left Bora Ra.

Bora Ra with his team members are hunting Klamkabot on Floating Island . See Klamkabot fled, Bora Ra ordered Yoyo Oo to launch Robot T . A group of yellow robots were seen coming out from under the spacecraft and they wrapped Klamkabot from every angle and buried their feet in the ground to stop Klamkabot's movement. Bora Ra was satisfied with that and ordered his buddy to lift Klamkabot into the ship. Klamkabot anxiously immediately scanned the existence of another nearby Power Sphere and discovered Ochobot who was on Earth. Then Klamkabot uses the rest of his Teleportation Power and fled himself (with the island) to Earth, making Bora Ra howl with all his heart in space.

Later, Bora Ra finds out from Yoyo Oo that he managed to locate Klamkabot's last location on Planet Earth but his location is unknown. Dissatisfied with the report, Bora Ra threatened to search for Klamkabot's place or be kicked out of his spaceship, causing Yoyo Oo to feel uneasy and immediately search for Klamkabot's place. After performing what it takes to track down, Yoyo Oo finally finds Ochobot's signal and 'informs' it to Bora Ra. So Bora Ra instructs Kiki Ta to speed up the spacecraft so that they can arrive on Earth before Klamkabot manages to gather his Teleportation Power again.

At the Tok Aba shop , when Gopal invited his friends home, the Tengkotak spacecraft arrived and landed at Pulau Rintis. His arrival was welcomed by Adu Du and Probe , then introduced them to BoBoiBoy for not knowing them. Bora Ra expressed his desire to take the Sphere of Power, and rose in blood when he found it was not Klamkabot. Yoyo Oo tells the truth, then finally suggests to catch Ochobot and use him to find Klamkabot as he has been contacted by him before.

Bora Ra then asks permission from BoBoiBoy to 'borrow' Ochobot, and without wasting time seize Ochobot and hand it over to Yoyo Oo. Yoyo Oo handcuffed Ochobot inside the Power Sphere Grinder and allowed their spacecraft to receive Klamkabot location signals. Seeing Ochobot captured, BoBoiBoy immediately transforms into BoBoiBoy Lightning and rushes towards Bora Ra, but is stopped by Gaga Naz . BoBoiBoy immediately split into three and opposed Gaga Naz, but eventually lost and they reunited. Gaga Naz then fights with Yaya , Ying and Gopal before asking permission from Bora Ra to exchange when his defense is insufficient.

However, Bora Ra rejects his desire and produces the Black Hole Power that begins to suck up everything in the Pilot Island Park including Yaya, Ying and Gopal and messes up everything. Bora Ra then stopped the black hole. With Ochobot already in his hands, Bora Ra along with Gaga Naz and Yoyo Oo return to the spacecraft and depart leaving the group of heroes.

Afterwards, Tengkotak, Adu Du and Probe head to Floating Island, using Ochobot to track the location of Klamkabot. Adu Du and Probe had time to remind Bora Ra that BoBoiBoy would definitely go save him because he and Ochobot were friends like them. It made them laugh at them causing Adu Du to get angry and then say they were cruel. After realizing that BoBoiBoy was heading to Ochobot, Bora Ra and Yoyo Oo handed Kurita to Adu Du and Probe, then threw them into the sea. After being exposed to water, Kurita grows into a giant robot squid that goes to attack them, along with BoBoiBoy and his friends.

When the Box landed on the Floating Island, Yoyo Oo took control of Ochobot to find Klamkabot in the caves. The search lasted for hours and when Yoyo Oo felt drowsy, Klamkabot attacked Ochobot, tapped his control and startled him. Under the direction of Bora Ra, Yoyo Oo sends the coordinates of Klamkabot's last location to him and J-Rex to hunt down BoBoiBoy and his friends, who arrive on Floating Island.

When BoBoiBoy and his friend discover Klamkabot and Ochobot, Klamkabot reveals that he has escaped from the Box, who is hunting for his teleportation power . They want it to spread their power faster across the galaxy, allowing them to conquer more planets than ever before. They are interrupted by Bora Ra and Gaga Naz, who later chase the Power Sphera Factory. Bora Ra manages to capture Klamkabot, while BoBoiBoy and his friends, including Ochobot, escape.

As soon as they brought Klamkabot back to their spacecraft , they forced its teleportation power by force, only to find it empty. They realized that Klamkabot had given his teleportation power to Ochobot. Yoyo Oo manages to track Ochobot's position and finds out that he never escaped from Earth. Bora Ra threatens BoBoiBoy to hand over Ochobot or his friend Papa Zola , Adu Du, Probe and Klamkabot will accept him.

BoBoiBoy and his friends go to the Box, and agree to hand over Ochobot. However, it later revealed that they planned to deport themselves and their friends from the Box. Before Ochobot was able to continue the teleportation, Kiki Ta fired shots and ruined their plan, revealing that they already knew their plan.

Bora Ra forcibly sucks Ochobot's Teleportation Power and fights against BoBoiBoy, who is later joined by Fang . Gaga Naz attacks Yaya, Ying and Gopal, while Yoyo Oo and Kiki Ta try to capture Papa Zola, Adu Du and Probe, who have boarded the spacecraft. When Bora Ra destroys Ochobot with Black Hole Compression, Ochobot gives his last energy to BoBoiBoy and his friends who upgrade their power. The improvement gave them a second level and they managed to beat their opponents.

Despite being almost defeated, Bora Ra bounced back. He let go of the Gargantua Black Hole that threatened to suck up the entire Floating Island while he took the opportunity to return to the spacecraft. After getting the coordinates, the Tengkotak spacecraft disappeared for a while before it teleported to the island again. Apparently, Adu Du had given false coordinates to Bora Ra causing him to get angry and start violent. So BoBoiBoy split into seven, one by one attacking Bora Ra and he was finally sucked into the Black Hole of his own creation.

Unlike the other Kubulus aliens, Bora Ra’s skin is red and only one antenna instead of two. He is the tallest Kubulus alien to be seen thus far, surpassing Ejo Jo.

He wears a black, formfitting one-piece suit, and armours his arms, legs and chest with dark purple guards.

When in combat mode, Bora Ra could deport his black-and-black shirts and equipped with Black Hole Hammer.

Despite his unusual appearance, Bora Ra is capable of being very friendly and even shows the collection of Power Spheres he finds to his guests. However, this masks Bora Ra's true nature: a sadistic, cruel, psychotic, and remorseless individual, to the point of turning against his own allies if it suits his needs as he did to Adu Du's group, and killing those who stand on his way. He is also greedy and selfish and does not hesitate to use force if he can not do what he wants.

BoBoiBoy Wiki has a collection of images and media related to Bora Ra.

Retrieved from "https://boboiboy.fandom.com/wiki/Bora_Ra?oldid=108747"
Community content is available under CC-BY-SA unless otherwise noted.