BoBoiBoy vs Ejo Jo Finale is the 2nd episode of Season 3 of BoBoiBoy and the 28th episode overall in the series.

BoBoiBoy, Gopal, Yaya, Ying, and Adu Du had fallen into Ejo Jo's trap. Now it's up to Trio of Justice consisting of Papa Zola, Tok Aba, and Iwan to save them.

Ejo Jo manipulates shadow hands to form a cocoon in order to trap BoBoiBoy and his friends. BoBoiBoy tranforms to BoBoiBoy Thunderstorm to destroy the cocoon with Adu Du but failed because of the cocoon's strength.

Ejo Jo began to focus to manipulate the Shadow Dragon. BoBoiBoy told Tok Aba and Papa Zola that they must put on the Power Bands and use it's power to distract Ejo Jo. Tok Aba puts on the Time Manipulation band while Papa Zola picks Gravity Manipulation, mainly because of it's pink color which made his students and Adu Du's jaw dropped. For Molecule Manipulation, Iwan volunteered among of all of the students who are not brave enough claimed that they are too young for it. Then, the three are ready to face up against Ejo Jo until Papa Zola asked him to wait to find suitable name for his team, in which has disturbed him. Papa Zola now named his team as Trio of Justice.

Tok Aba used his power to run as fast as he can to stop Ejo Jo, but gives up to lay down out of exhaustion. Papa Zola then used the full power of Gravity Flight against Ejo Jo, this however does not work out properly and he flies backwards instead, causing Ejo Jo to question his actions and lost concentration. Papa Zola kicked Ejo Jo with "Kick of Handsomeness" which has disturbed his power and concentration completely. Ejo Jo, angered and challenged, created a shadow manipulation of himself to beat up Papa Zola.

BoBoiBoy asked Iwan to transform the Shadow Cocoon, only to find out he can't do it. Fang gained consciousness and sees the battle in front of him. Iwan repeatedly tries to use his power, but failed as much. Gopal suggested to Iwan that he should use his own voice to activate his power.

Ejo Jo's self manipulation shadow managed to gain the upper hand on Papa Zola. The shadow almost kicked him with a dangerous attack until Tok Aba used his power to slow down the time and moved Papa Zola before changing back the time, making the shadow to miss his attack. This continues for a while until Ejo Jo managed to turn the sky dark yet again, indicating the arrival of the shadow dragon.

BoBoiBoy and Gopal began to hurry Iwan into using his voice as the cocoon were getting sucked into the dragon's mouth. They cheered on him, saying that they believe in him. Gaining confidence by the help of his friends, Iwan opened his mouth and they heard his voice for the first time, with Yaya and Ying being shocked and Gopal with BoBoiBoy laughing to the deepness of his voice. Iwan lost his confidence, making Yaya and Ying upset with the boys. Gopal apologized and Iwan finally managed to transform the cocoon. BoBoiBoy split into three and broke out of the cocoon along with his friends.

Then BoBoiBoy Quake set an Earth Spike so they can handle it by blowing through the dragon. Papa Zola, Tok Aba and Iwan return the power band to Gopal, Yaya, and Ying. BoBoiBoy Cyclone tried to use his wind to counter attack but failed. Yaya and Ying use their power to save their friends from getting eaten by Shadow Dragon. They ask Gopal to turn Shadow Dragon into other things and he did it so. But Ejo Jo used his power to prevent Shadow Dragon from turning into other things.

As BoBoiBoy Quake saw his friends are gonna be eaten by Shadow Dragon, he then summoned the Earth Dragon Golem and battled the Shadow Dragon but drangled. Fang said to BoBoiBoy that he must stop Ejo Jo to defeat the Shadow Dragon. Then, the 3 BoBoiBoys go to Ejo Jo but the Shadow Dragon stopped them. Luckily, Mukalakus arrived just on time to punch it and throw it to Ejo Jo, performed Combo Movement on him and the band was removed from Ejo Jo. As they celebrated their victory, Adu Du appeared in front of Ejo Jo and tried to attack him but Ejo Jo managed to go to his spaceship and Adu Du tried to attacked them although BoBoiBoy tried to talk to him out of it but the spaceship was driven to exile the Earth and Adu Du was very angry and called Ejo Jo a coward. As he was about to leave, he looked at Boboiboy and his friends. He was pissed off and left. They feel glad that they are saved and Fang said that he was good until he was angry when BoBoiBoy thought that he is now better than him. They started again a fight while their friends are laughing at them.

BoBoiBoy Wiki has a collection of images and media related to BoBoiBoy vs Ejo Jo Finale. 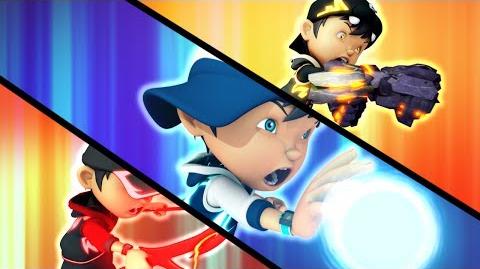 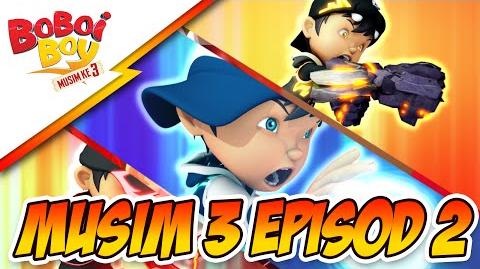