BoBoiBoy Thunderstorm, also known as BoBoiBoy Halilintar, is the second tier elemental form of BoBoiBoy Lightning. He is the first elemental form to evolve in both BoBoiBoy and BoBoiBoy Galaxy.

BoBoiBoy Thunderstorm first appears when BoBoiBoy Lightning is kidnapped by Adu Du and Probe. He was then tortured by them via exploding balloons, revealing that BoBoiBoy had globophobia.

BoBoiBoy Thunderstorm appeared again in the Tok Aba and BoBoiBoy's Kokotiam to attack Bora Ra who had kidnapped Ochobot, but failed when barred by Gaga Naz. Then BoBoiBoy called on the Three Elemental Split and each attacked Gaga Naz, but unfortunately the three BoBoiBoy were defeated easily. Finally, BoBoiBoy's three rebounds. BoBoiBoy Thunderstorm also appears briefly to attack Kurita with Thunder Spear.

BoBoiBoy Thunderstorm appeared again with Cyclone, Quake, Blaze and Ice and he attacked Bora Ra with his Thunder Spear, which caused Bora Ra to faint and fall to the ground. As he was falling, BoBoiBoy Blaze and Ice did a combo attack and he was squeezed between the glacier and giant meteor and then all of BoBoiBoy re-assembled. Bora Ra is later dissatisfied and produces a gigantic black hole to inhale them all while he tries to go to his ship while requesting the telepathic coordinates of Yoyo Oo. Unfortunately, Adu Du sent a fake coordinate which teleported him back to the island. Yoyo Oo apologized to Borara, saying that Adu Du was the one who gave the coordinates, not him. Papa Zola later pretended that it was Yoyo Oo who did it. Borara, infuriated, tries to attack him, but BoBoiBoy splits into seven and Borara was sucked by BoBoiBoy Cyclone's wind before he was able to hurt Papa Zola. All of Boboiboy's elements attacked Bora Ra, including Thunderstorm who attacked Bora Ra, who was binded by BoBoiBoy Thorn's vines, with his Thunder Spear.

BoBoiBoy Thunderstorm finally makes a reappearance in BoBoiBoy Galaxy Episode 14, when BoBoiBoy forces the transformation in order to protect his friends. However, Thunderstorm proved unstable and he was unable to maintain the Second Tier Form since he hasn't gotten the other elements yet. Nonetheless, with assistance from Captain Kaizo, he was able to defeat Jugglenaut.

BoBoiBoy Thunderstorm first appears when BoBoiBoy transforms into him to chase after Adu Du and Probe, who had stolen Eggabot from them. After swiftly defeating them alongside Ying, Yaya, and Fang, BoBoiBoy calls him out alongside Quake and Thorn to rescue Adu Du and Probe from Giant Penguin.

BoBoiBoy Thunderstorm appears alongside the other elements, when BoBoiBoy splits them to fight against Retak'ka. Teaming up with Thorn and Cyclone, Thunderstorm preformed a devastating attack on Retak'ka, who is unimpressed with BoBoiBoy splitting his elements which weakened him. After witnessing Solar getting absorbed by Retak'ka, he was caught alongside the other elements, where he was absorbed, and thus ceased to exist. His Lightning Power can be seen being used by Retak'ka as the elemental form, Voltra.

BoBoiBoy later was able to steal back the Lightning Element from Retak'ka, which returned Thunderstorm to BoBoiBoy. In the final moments of the battle, BoBoiBoy called out Thunderstorm who fused with Solar into BoBoiBoy Supra, to finally defeat Retak'ka once and for all.

Thunderstorm appears when Fang, Gopal and him fight the Brolangkas Brothers. Thunderstorm saves Gopal from one brother and starts fighting. However, when they are in trouble, Thunderstorm orders Gopal to trap the brothers with his powers. After trapping them, Thunderstorm reverts back to BoBoiBoy (base) and go for Crystal Salt.

His bodily appearance is the same as the other forms of BoBoiBoy's elemental personas, with having the same physique and cropped black hair. But unlike the others, BoBoiBoy Thunderstorm possesses scarlet eyes and is clad in mostly red and black. He wears his signature cap in a common style where the bill is at the front. The cap is fully black in color minus the three white 'horns' decorating the top, neon red lining adorning the rims of the bill, and his signature red lightning bolt insignia rests on the center of the cap. His vest that he zips halfway up is black as well, with dark red linings on the hoodie, neon red jagged lightning-like patterns on either sides on the front. He wears a red shirt underneath the vest and its sleeves are 3/4 long with black cuffs. Fully black pants and shoes that are a mix of red and black to complete his attire.

In BoBoiBoy Galaxy, most of BoBoiBoy Thunderstorm's features are similar to that of Lightning's and his previous incarnation, but now all along his clothing, there are neon red lightning marks.

In BoBoiBoy Movie 2, he has a red and black outfit with white lighting marks. The red coloring of his outfit is also brighter than before.

Due to being the evolved form of BoBoiBoy Lightning, technically a personification of BoBoiBoy's anger, BoBoiBoy Thunderstorm is just as or even more aggressive than Lightning is. He is shown to be ruthless and almost wrathful in combat and did not hesitate to hurt his friends when under the influence of Adu Du. However, he is still BoBoiBoy at heart and still retains some semblance of his original self.

In BoBoiBoy Galaxy, Thunderstorm has a much more violent personality in comparison to his younger self. He proved quite powerful but was almost blinded by the rage. It is unknown whether he is normally like this because of his short appearance.

Before the Mega Thunder Strike

The strike being ready to go 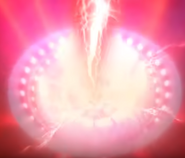 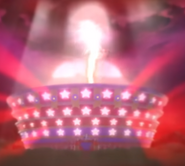 BoBoiBoy Wiki has a collection of images and media related to BoBoiBoy Thunderstorm. 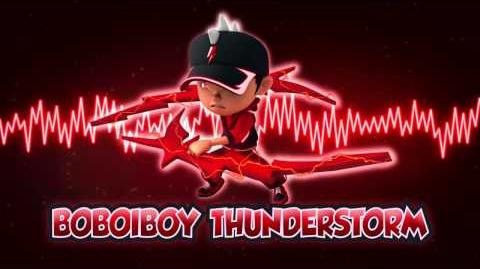