BoBoiBoy Solar is the evolved form of BoBoiBoy Light. He debutted in BoBoiBoy: The Movie as one of BoBoiBoy's new elemental forms. He returns back at the first season finale episode of BoBoiBoy Galaxy.

BoBoiBoy evolved when Ochobot got destroyed by Bora Ra and gave his last power to BoBoiBoy and his members, bringing BoBoiBoy to enragement.

After Captain Vargoba knocks BoBoiBoy hard, he is blasted from room to room before finally flying out into outer space in a rather weak condition, beginning to freeze. However, the sun later appears and melted the ice, causes BoBoiBoy to regain his Solar power.

When BoBoiBoy get back his stolen elements, including the Light Element, which returned Solar back to BoBoiBoy. He was later summoned to perform an Elemental Fusion with BoBoiBoy Thunderstorm to form BoBoiBoy Supra to defeat Retak'ka in the final battle.

Solar returned in the comic adaption of BoBoiBoy Galaxy (Season 2). He also had a fusion with BoBoiBoy Thorn, called BoBoiBoy Sori in the 9th issue of Galaxy season 2.

In the first movie, BoBoiBoy Solar wears similar clothing to his regular outfit, though in different colors. He wears a white jacket with orange ascents. His pants are orange with a decorative yellow symbol on the right pant leg. He wears white sneakers which has orange laces and black soles. Solar wears a white hat with noticeable yellow patterns on it. The logo can be see the center and the cap's spines are yellow. He also wears bright orange shades.

In BoBoiBoy Galaxy and the second movie, Solar now has a gray incorporated into his design. The bill of his cap is now gray, along with parts of his sneakers, pants, gloves, and shirt. His jacket is short sleeved with yellow folds at the ends. The insides of the jacket seem to be orange. Bright yellow patterns can be seen adorning most of the outfit. Like his previous design, his cap is white with yellow spines. Solar continues to wear shades, though it is now a lighter shade of yellow.

Solar shares many of Light's characteristics, though is not shown much. Like Light, he is intelligent and powerful, and also smart and strategic. Due to him being the embodiment of BoBoiBoy's rational thinking, he could be someone who is very careful in his decisions. He is also stated to be very confident which leads him pushing everyone away in attempt to finish the goal by himself. 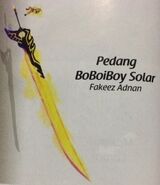 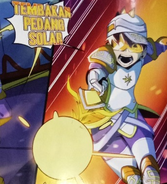 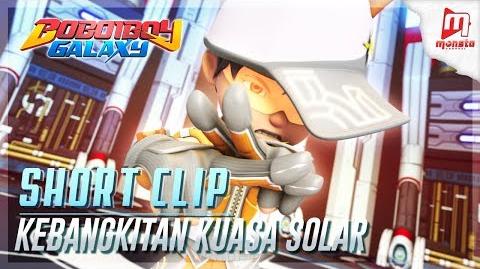 BoBoiBoy Wiki has a collection of images and media related to BoBoiBoy Solar.