BoBoiBoy Quake, also known as BoBoiBoy Gempa, is the evolved elemental form of BoBoiBoy Earth after BoBoiBoy Thunderstorm and BoBoiBoy Cyclone were defeated by Mukalakus.

BoBoiBoy Quake appeared for the first time after forcing himself to grow when Mukalakus controlled by Adu Du did not stop attacking his friends and two basic elements. Mukalakus who realizes the act of BoBoiBoy is acting immediately to stop him by making an attack. However, finally BoBoiBoy Earth successfully evolved into BoBoiBoy Quake as its new power and he dismissed every Mukalakus attack. BoBoiBoy Thunderstorm and BoBoiBoy Cyclone also helped the BoBoiBoy Quake against Mukalakus until the three of them made a combo attack to eliminate Mukalakus that Ochobot was saved. Finally, the three BoBoiBoy merged back and lay on the ground next to Ochobot.

BoBoiBoy Quake appeared again with Thunderstorm, Cyclone, Blaze and Ice and he attacked Bora Ra. Then, BoBoiBoy Blaze and Ice did a combo attack and he was squeezed between ice and giant meteor and then all BoBoiBoy re-assembled. But, Bora Ra is dissatisfied and produces a gigantic black hole to inhale them all while he tries to go to his ship while requesting the telepathic coordinates of Yoyo Oo. Unfortunately, he was deceived by Adu Du and wanted to attack Papa Zola, eventually BoBoiBoy split into seven and all BoBoiBoy attacked Bora Ra all the time until Bora Ra was sucked into his own black hole.

Quake was first called out to fight Retak'ka when BoBoiBoy decided to travel to the TAPOPS station to help the members. Quake was one of the three elements, alongside Blaze and Ice, who avoided being absorbed by Retak'ka. Quake later appeared alongside the other elements when BoBoiBoy was training under Hang Kasa.

When Hang Kasa betrayed BoBoiBoy and his friends, Quake was stolen from BoBoiBoy by Hang Kasa, who used his power to transform into Crystal. Retak'ka takes the Earth Element from Hang Kasa upon his 'death', which he used himself as Retak'ka Crystal. After BoBoiBoy fuse into FrostFire and was able to overpower Retak'ka, he managed to take the Earth Element back with the help of Ochobot, which returned Quake back to BoBoiBoy. BoBoiBoy then perfoms a duo elemental split consisting of Quake and Ice. BoBoiBoy Quake fuses with BoBoiBoy Ice to form BoBoiBoy Glacier, which he used to stop the dam, which had been torn down by Retak'ka for flooding, by summoning a giant earth-ice golem and freezing the water before it could flood.

BoBoiBoy Quake will be returning as an element in the comic adaption of BoBoiBoy Galaxy.

BoBoiBoy Quake has a look similar to BoBoiBoy Earth, but its hats, jackets, and trousers are turned into a black color and an old-fashioned blended coat of arms with a shimmering pattern of yellow earthquake pattern. Iris also turns into a gray color but his jacket drops turn yellow.

In the second season, BoBoiBoy Quake wears a full-blown jacket, behind it plus a hood and fold on his yellow sleeve. The motifs on his clothes have not changed much but still retain the same concept of shimmering yellow quake.

In BoBoiBoy Movie 2, Quake retains most of his original look but has more shimmering yellow earthquake patterns.

BoBoiBoy Quake retains much of Earth's persona, being the closest to BoBoiBoy's original personality. Like Earth, he is serious and mature, focused on the task at hand. He is generally seen as the 'leader' of the elements.

BoBoiBoy Wiki has a collection of images and media related to BoBoiBoy Quake. 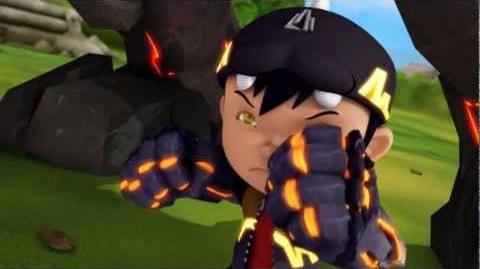