BoBoiBoy Lightning, also known as BoBoiBoy Petir, is one of the original three elemental forms that BoBoiBoy obtained, the others being BoBoiBoy Wind and BoBoiBoy Earth. Lightning later evolved into BoBoiBoy Thunderstorm in Season 1, Episode 6 and again in BoBoiBoy Galaxy Episode 14.

In Season 1, Episode 6, he is tortured by Adu Du, Probe, and Computer because of his severe globophobia. In his fear and rage, Lightning evolved into Thunderstorm and attacked them, only to reveal that he had lost his memory as well as sense of self. His original self-was later restored after BoBoiBoy's 'Awesome!' catchphrase.

Bago Go release a new product called the BoBoiBoy Exercise Machine which is based on him, it costs RM 90 Million and 90 cents. He also appeared in Season 2, Episode 1 when helping the other BoBoiBoys putting the new logo of Tok Aba and BoBoiBoy's Kokotiam, earlier in that episode, he appeared alongside BoBoiBoy Earth and BoBoiBoy Wind when they attacked Adu Du together with their powers and the combo movement to fight against Recycled Tiger.

He returns in BoBoiBoy Galaxy as one of BoBoiBoy's main elemental forms. His color scheme and costume now changed.

His appearance bears striking resemblance to BoBoiBoy's original form, albeit the cap being put on forwards (instead of backward) and has an orange yellow color scheme.

Lightning is noticeably more different to how his counterpart in the original series looked like. In addition to being much taller and notably more mature as BoBoiBoy, Lightning's new color scheme is now a bright yellow, possibly to match his colors of his electric powers. He still retains the frontwards facing cap, but on the front of the hat, the lightning element symbol is visible. Lightning's armbands are also black instead of red, also having the Lightning elemental symbol on it. His belt changed from black to red with black rims.

Lightning is the most serious and combat efficient of all the BoBoiBoy forms. Being very combat-oriented, Lightning also houses a very strong short-tempered, more evident in the original series. Lightning is quick to anger and won't hesitate to show that he is displeased with the situation. If BoBoiBoy Water is the form who rather avoid a fight than participate, Lightning is his polar opposite, being the first ones to engage in a battle. His rage can often blind him and can cause more harm than good. Despite his anger being placed out of check sometimes, Lightning is one of the bravest forms and definitely not afraid of fighting enemies, no matter how big and scary they might be.

Being tempered and aggressive is the main qualities of Lightning's form, which is probably the part of BoBoiBoy's personality that tends go get angry sometimes. It's also worth nothing that BoBoiBoy tends to use this form when he needs to keep up in a tight battle, mostly due to Lightning's very attack-oriented ability kit, but he also tends to use Lightning if BoBoiBoy's original persona is angry himself, though this role seem to have been adopted by Fire in Galaxy.

In Galaxy, Lightning is evidently less tempered, being more matured and has not shown much of his short-temperateness, but still, retains his aggressive and combat efficient nature. He is arguably the best form combat-wise due to his aggressive displacement and attack-oriented abilities. A lot of his aggressive and violent tendencies were adopted into Fire, while Lightning gained a loner-esque, quieter, but obedient nature.

BoBoiBoy Lightning has Electrokinesis, the power to manipulate electricity to his will. Most of Lightning's abilities are related to using electricity in more attack-based abilities. 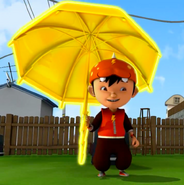 Ability seen and used in the BoBoiBoy Galaxy.

BoBoiBoy Wiki has a collection of images and media related to BoBoiBoy Lightning.