“Fang to the Rescue”

While the kids are on break, the Space Pirates manage to track down Ochobot and MotoBot to earth and unleash a full-scale attack.

The episode begins with MotoBot asking Koko Ci about their ship’s status. Koko Ci says it needs only a few more tweaks before they can return to the TAPOPS station and introduce the new recruits to the rest of the team.

Unbeknownst to them, the Space Pirates use their captain’s old hook left on Earth to track their location. A flashback reminds us how the hook remained on Koko Ci’s ship after he escaped. The captain vows to defeat BoBoiBoy and capture their Power Spheres.

On Earth, BoBoiBoy asks Ochobot what’s wrong with his Power Band, but Ochobot has no idea. Ying and Yaya assure BoBoiBoy that he doesn’t have to worry about new missions that come up because with them, any mission is “a walk in the park.” A hungry Cattus interrupts them, but he refuses the cat food that Gopal transforms for him. Yaya asks BellBot about Cattus’ diet, but BellBot doesn’t know as he is usually facing towards Cattus. They conclude that as a cat, Cattus must want fresh fish, and they head towards the harbor, where they find Papa Zola and Mr. Mat fishing.

Papa Zola is utilizing the pirate captain’s old hook to obtain huge catches. He notes how much BoBoiBoy’s gang have grown when they arrive. Yaya asks Papa Zola if he could spare some fish for Cattus, and Papa Zola agrees on the condition that Cattus learns how to fish so he can feed himself in the future. However, Cattus runs at Papa Zola's basket of fish, knocks the fish back into the water, and starts eating the rattan wood of the basket, which Yaya deduces must be Cattus’ only food. Despite wasting Papa Zola’s hard work, Cattus takes a shine to Papa Zola as he “gave” him food. Papa Zola decides to adopt him as his 'Cat of Justice' to substitute for his fish and dangles his fishing hook for Cattus to play with. BoBoiBoy and Gopal recognize it as the Space Pirate captain’s hook.

Just as they mention the Space Pirates, their spaceship arrives at the harbour. The captain demands to know who would dare to take something belonging to him, Captain Separo. After attempting to blame Gopal for stealing the hook, Papa Zola flees the scene. Koko Ci’s ship alerts MotoBot and Koko Ci to the pirate ship’s signal on Earth. They and Ochobot follow Tok Aba to the safe hiding spot he claims to know.

One of Captain Separo’s crew informs him that they’ve detected the Power Spheras’ signals. Separo orders his crew to retrieve BellBot as he leaves to go after MotoBot and Ochobot. BoBoiBoy transforms into BoBoiBoy Wind, and he along with Yaya fly after the Space Pirates’ ship while Ying, Gopal, and Papa Zola stay and defend Bellbot.

Ying uses her slow-mo field to slow the crew’s descent and move Papa Zola and Gopal to safety. Yaya and Wind attack the ship, prompting the pirates to counter-attack. One attack almost hits Yaya until Wind switches to BoBoiBoy Earth and shields them long enough for them to board the ship. Earth then switches to BoBoiBoy Lightning to engage Separo with his Lightning Blades.

Back at the harbour, the pirates are still caught in Ying’s slow-mo field, and Gopal and Papa Zola discuss how they should change the Pirate Minions into food, despite Ying's protests for them to attack before her power runs out. Just as Gopal readies his attack, Ying runs out of energy. Before the pirates can attack, Gopal notices Cattus nearby and transforms the minions into rattan wood fish baskets. Cattus notices and attacks them, easily dispatching the minions.

At the cafe, Tok Aba and the others are hiding in a small cupboard under the counter of Tok Aba’s cafe when the Space Pirates arrive. Yaya takes care of the rest of the Pirate Minions with a Gravitational Smash while Lightning manages to knock the captain back and declares that he has lost. Ying, Gopal and Papa Zola arrive in time to hear BoBoiBoy say this and cheer, making Koko Ci think that the pirates have been taken care of and it’s safe for the Power Spheras to come out. Separo sees that all three Power Spheras are in the same place and deploys his own Power Sphera, HookaBot, to catch them all.

Separo uses HookaBot as a flail and lands a hit on Yaya. BoBoiBoy tries to defend her from getting hit a second time but his Power Band malfunctions and he is hit by the attack at full force. The attack knocks him unconscious and he falls off the ship into a tree below, despite Yaya's attempts to save him. Seeing that their strongest hero has been defeated, Captain Separo prepares himself to attack the rest of the cast and steal the Power Spheras.

However, he’s interrupted by BoBoiBoy’s voice coming from the tree, revealing that he had survived the fall and unlocked a new form, calling himself BoBoiBoy Leaf. The others are surprised to see that BoBoiBoy has gained a new Element, but also because they realise that Leaf is naïve and scatterbrained due to his head injury from falling.

Captain Separo moves to attack him, so Leaf throws some stunning Shuriken Leaves that not only hit the captain, but everyone else too. As Leaf apologises Separo cuts away the leaves and uses HookaBot to capture all three Power Spheres, only to lose them when Leaf hits him with an Itchy Leaf blade. He then deflects HookaBot’s ensuing cannon ball shots with a Leaf Whirlwind and barrier before finally capturing Separo in a Woven Leaf Trap.

Much later, Captain Separo begs to be released due to the itchy leaf that BoBoiBoy had thrown earlier remaining in his side. BoBoiBoy’s friends congratulate him and ask how he was unable to unlock another element. Ochobot concludes that the Power Band wasn't malfunctioning, but was adapting itself to an element he had reawakened on Gurunda by coming into contact with the Kaktoi tribe. BoBoiBoy says that helping them and Cattus out was worth it, just as said cat comes up to BoBoiBoy with his stomach grumbling. Gopal, annoyed, asks what his stomach is made of if he wants to eat again so soon. This angers Cattus and causes him to attack Gopal as the episode ends. 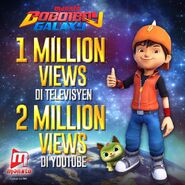 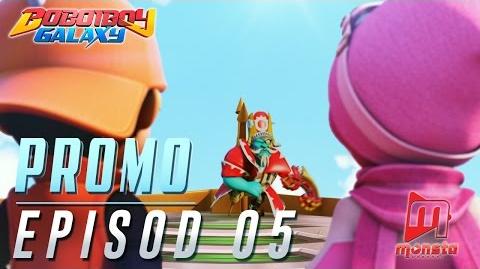 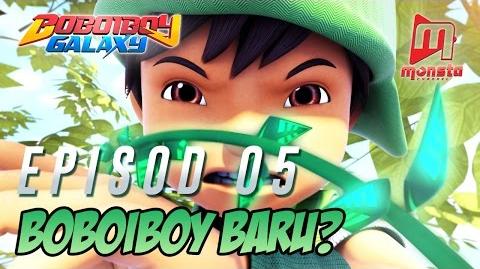