BoBoiBoy Galaxy Special is a spin-off special of BoBoiBoy Galaxy. It will revolve around BoBoiBoy and his friends’ adventures in the TEMPUR-A Headquarters seen in the ending of finale episode. The special was expected to be released at end of 2018 or early 2019. [1], but it was delayed due to Monsta needing more manpower and focusing more on BoBoiBoy Movie 2.[2]

On September 9, 2020, it was announced that the BoBoiBoy Galaxy Special would be a 1-hour special to celebrate BoBoiBoy's 10th anniversary in 2021.[3] But on January 27, 2021, it was announced that it would be cancelled due to production limitations during the pandemic, instead of the special, they will make a Season 1, Episode 1 extended version to celebrate BoBoiBoy's 10th anniversary.[4] 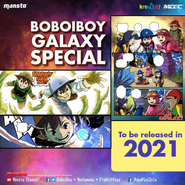