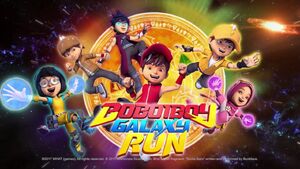 Enhance the power of BoBoiBoy, a popular non-stop free running game based on popular kids full of amazing adventures, fun, and galaxy adventures for you to continue your journey.

Power Sphere gives unimaginable power. In the hands of evil aliens, they can wreak havoc on the entire universe. Run around the galaxy with your friends and defeat the villains who want to capture Power Spheres.

Characters of the game