It shows Yaya, Ying, Gopal, Fang, Tok Aba, and Ochobot trying to put BoBoiBoy into bed and control BoBoiBoy Fire because he could not be controlled any longer, and a fight happens between BoBoiBoy Fire and his friends.

Continuing the previous episode, BoBoiBoy blames himself about the fire accident, thus including him as the suspect. Adu Du commands him to remember the past and to recognize himself as the real arsonist. However, BoBoiBoy's gang blames Adu Du for inventing a fake story. But instead, Adu Du tells them that they will watch the appearance of BoBoiBoy Fire by nightfall. Then, Yaya recommends BoBoiBoy to take a rest in order to reveal the truth. But, when Ochobot scanned him, he couldn't find anything about the supposed fire power. And due to this, Gopal gets mad and starts to blame his best friend for not telling him about his new ability. BoBoiBoy then quickly replies that he doesn't know everything about his new power. Learning the failure, the heroes knows that they would have to wait until nightfall to see BoBoiBoy's new power. Tok Aba also suggests that his grandson should learn more about his power so that he can control it.

At Rintis Island Primary School's soccer field, BoBoiBoy pretends to sleep. He then complains that he shouldn't be sleeping at the soccer yard. However, Gopal assures BoBoiBoy, telling him that the reason they placed him in the school yard in the first place was so that if the fire powers were true, there would be minimal damage around the field. Due to that BoBoiBoy cannot sleep, his friends attempted to help him in various ways; Ying tried making him run around the bed for 1000 km to make him tired, and thus more sleepy. Yaya attempted to give him some of her biscuits since he says that he's hungry, but BoBoiBoy immediately rejected the offer. Gopal tried to sing him a lullaby so that BoBoiBoy can sleep, but it's very loud and does not make any sense.

Finally, Fang tries to sing a Chinese song to BoBoiBoy, which unfortunately also does not make sense. Tok Aba then tries to tell the gang a bedtime story about the history of Tok Aba and BoBoiBoy's Kokotiam: In 1967, Tok Aba's father created his own business. This story then managed to make everyone sleep, excluding Tok Aba and Ochobot. But while they were sleeping, BoBoiBoy is seen tossing around in the bed. Ochobot then quickly scanned him, and finds traces of fire power. After this, BoBoiBoy then transforms into BoBoiBoy Fire.

The flash that came along with the transformation manages to awake the gang, who are all surprised when they see that BoBoiBoy truly has fire powers. But, even though BoBoiBoy Fire seems evil-looking, he suddenly becomes very friendly and cheerful, being happy to be able to see all of his friends. Due to the shock, Yaya then quickly asked if BoBoiBoy Fire knew regarding the fire incidents around Rintis Island. BoBoiBoy Fire then thought for a moment, but then remembered what really happened during those incidents:

He also said that he was bored about his job as a superhero and a student, stating that there was too many work to be done. Gopal theorized that his power came from his stress. His friend convince him to return to normal and control his power, but he disobey it and became mad because he was only wanting to release his stress. He attack Gopal many times using Fireball and Fang shield him with Shadow Shield. Fang try to negotiate with him, but he said that his friend were making trouble. He use Volleyball Fire and Fang use Shadow Finger Prick to dodge it. BoBoiBoy Fire launching Multiple Fireball Attack and Fang and Ying combine their Shadow Shield and Time Shield to protect all of the heroes, but failed during the limited time. BoBoiBoy Fire using Fireball Penalty Kick, but Gopal turn it into banana fritters and his hand got burn. He finally swallow it and make BoBoiBoy Fire happy. Fang project Shadow Tiger to jump the fire ring to make BoBoiBoy more happier. The shadow turn to Shadow Eagle and flew to the fire ring. Gopal also turn the bottle to friend chicken and Ying slow it with Time Freeze Power and make him more happier.

In the middle of the event, Adu Du and Probe come to mess the happiness and attack the heroes. BoBoiBoy Fire turn mad and create a Maximum Fireball. Mega Probe try to shoot him, but got a very big attack from BoBoiBoy Fire. He fell and turn back to normal. Fang tell him that he was get his new power.

Back to Cube Fortress, Probe and Adu Du finally got the fire sample from the fireball and finish the experiment. Adu Du announce to wait the appearance of BoBoiBot.

The next day at school, Papa Zola bring out the new sport kit, but shock about the burning soccer field.

BoBoiBoy has gotten tired,
So close your eyes and sleep,
It is good for your health to sleep early,
BoBoiBoy is a good baby... 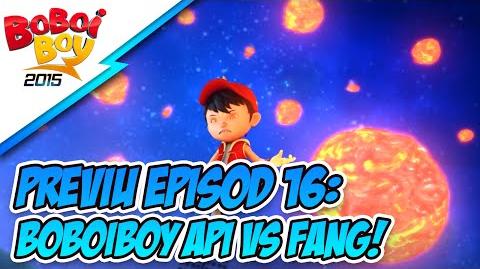 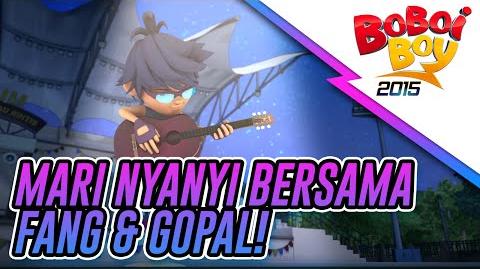 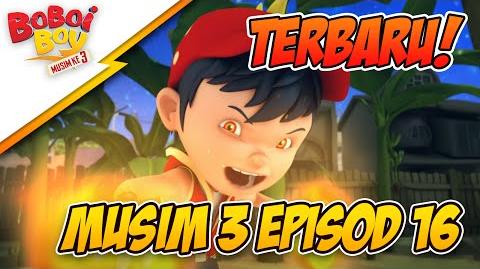