BoBoiBoy Wind accidentally got some fake milk with Chemical X which was made by Adu Du to use in making Yaya's biscuits. Because of eating plenty of contaminated biscuits, he got crazy, which strengthened his powers until he turns into BoBoiBoy Cyclone (Season 1, Episode 11). He was cured when Ochobot showed to him the last episode of a telenovela called "Red Roses" where Azroy finally sees his cat Sasha, because of the sad ending, he cried until he turned back to BoBoiBoy Wind.

He later appeared in Season 2, Episode 2 after BoBoiBoy Thunderstorm's transformation, but he was trapped by Fang's Shadow Hands, in which Gopal thought that he was defeated but he later transformed to BoBoiBoy Quake.

BoBoiBoy Cyclone appeared again with Thunderstorm, Quake, Blaze and Ice and he attacked Bora Ra. Then, BoBoiBoy Blaze and Ice did a combo attack and he was squeezed between ice and giant meteor and then all BoBoiBoy re-assembled. But, Bora Ra is dissatisfied and produces a gigantic black hole to inhale them all while he tries to go to his ship while requesting the telepathic coordinates of Yoyo Oo. Unfortunately, he was deceived by Adu Du and wanted to attack Papa Zola, eventually BoBoiBoy split into seven and all BoBoiBoy attacked Bora Ra all the time until Bora Ra was sucked into his own black hole.

BoBoiBoy Cyclone first appears alongside the other elements, when BoBoiBoy splits them to fight against Retak'ka.

Teaming up with Thorn and Thunderstorm, Cyclone preformed a devastating attack on Retak'ka, who is unimpressed with BoBoiBoy splitting his elements which weakened him. After witnessing Solar getting absorbed by Retak'ka, he was caught alongside the other elements, where he was absorbed, and thus ceased to exist. His Wind Power can be seen being used by Retak'ka as the elemental form, Tempest.

When the Farm Guards of Cidas Valley Farm arrives, BoBoiBoy transforms in Cyclone and attacks to blow them away. But when the Guards become angry, They attack with a Holy Chili Tranquilizer which injures Cyclone's hand and legs.

After Yaya and Ying falls down from a High-Voltage Shockwave with Gopal running with the documentaries, BoBoiBoy is forced to use Triple Split and summon Cyclone, Blaze, and Thorn.

BoBoiBoy Cyclone has a very similar look to BoBoiBoy Wind, but the hat, jacket, and pants are dark blue and the sleeves are white with a blue hurricane-patterned pattern. Her eyes were also turned blue but her jacket's zipper was turning yellow.

In BoBoiBoy Movie 2, he has a similar appearance that of his previous incarnation but his jacket is now a stormbreaker jacket.

BoBoiBoy Cyclone is more subtle and less difficult to control. He is also a very adventurous boy, especially when he ate Yaya's biscuits that have been mixed with Chemical X that made him crazy. However, he knows when to be serious.

BoBoiBoy Wiki has a collection of images and media related to BoBoiBoy Cyclone. 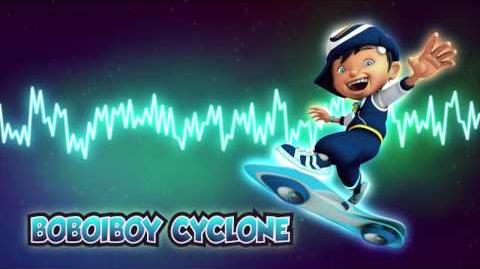