BoBoiBoy Blaze is an evolved version of BoBoiBoy Fire. He made his debut in BoBoiBoy: The Movie.

BoBoiBoy evolved when he felt very infuriated due to a deeply scarring incident that took place, all was under Bora Ra's intentional act that smashed Ochobot into pieces. Ochobot gave his last power to BoBoiBoy and his members allowing them to upgrade their power. Thus, BoBoiBoy Fire was able to evolve to BoBoiBoy Blaze, though sometime after this, BoBoiBoy lost the ability to use Fire and subsequently Blaze.

BoBoiBoy first calls out Blaze to battle Retak'ka when he tries to go rescue Koko Ci and the other members of TAPOPS. Alongside the other elements, Blaze attempts to battle Retak'ka, however is defeated. However, Blaze was able to avoid being absorbed, being one of the last three elements BoBoiBoy that BoBoiBoy managed to keep.

Blaze can later be seen again when BoBoiBoy is training under Hang Kasa, growing stronger and learning new techniques.

In the final battle against Retak'ka, after Quake was taken away, BoBoiBoy only had Blaze and Ice left. He tried to fight Retak'ka but was quickly beaten. After BoBoiBoy witnesses Retak'ka dispatching Hang Kasa, whom BoBoiBoy had grown close the. Enraged, Blaze fused with Ice to create BoBoiBoy FrostFire.

While Adu Du capable of martial arts steals Ochobot, enrage BoBoiBoy to awaken the Blaze element. BoBoiBoy Blaze and Adu Du fight at their own skills but BoBoiBoy Blaze fails to defeat the new strong Adu Du and rescue Ochobot, until he is forced to split and summon BoBoiBoy Thorn and Ice and attack. At last they rescue Ochobot and Blaze fires a Giant Fireball but Adu Du and Probe escapes quickly.

Later while fighting Brolangkas Brothers, Blaze returns with Fang, who use Shadow Bear Fusion and attack them, Blaze lands a Powerful Fiery Fist that hits a brother hard. Soon the two brothers shoots a fiery ball which is moving as an energy beam, the beam knocks Blaze, Gopal and Fang. Blaze transforms himself to Quake and the rest fight continues.

BoBoiBoy Blaze has black hair and his eyes are shades of red and orange that give a fire-like impression. He wears a sleeveless black shirt underneath a red and yellow sleeveless jacket that's adorned with neon red fire patterns. The jacket has a red hoodie with yellow lining that covers his predominantly black cap. He also wears black shorts that reaches slightly past his knees with the same neon fiery patterns on the bottom half. BoBoiBoy Blaze is wearing a sports black-red sneakers with yellow laces. Scarlet arm warmers (that reach from his forearms to almost his knuckles) worn on both arms complete his look with the power band fastened over the arm warmer on his right wrist.

In BoBoiBoy Movie 2, BoBoiBoy Blaze wears a sleeveless red shirt underneath a red and yellow sleeveless jacket that's adorned with neon red fire patterns. The jacket has the collars up. He also wears black shorts that reaches slightly past his knees with the same neon fiery patterns on the bottom half. BoBoiBoy Blaze is wearing a sports black-red sneakers with yellow laces. Scarlet fingerless gloves worn on both hands complete his look with the power band fastened over the arm warmer on his right wrist.

BoBoiBoy Blaze is one of the strongest BoBoiBoy elemental powers along with BoBoiBoy Quake who can summon the Earth Dragon technique. As the strongest and most dangerous character at the same time, the formidable powers that he used are: 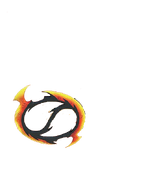 BoBoiBoy Wiki has a collection of images and media related to BoBoiBoy Blaze.