BoBoiBoy is a Malaysian animated series produced by Animonsta Studios. The series was released on 13 March 2011 in TV3 and 18 June 2011 in Disney Channel. The series ended on 11 June 2016 in TV3 with 3 seasons in total. A sequel titled BoBoiBoy Galaxy is currently airing.

The story centers on an 11 year-old-boy named BoBoiBoy who receives elemental-based superpowers from Ochobot, a power sphere. He eventually forms a superhero team with his friends Yaya, Gopal, and Ying to protect Earth from Adu Du, an alien who intends to steal cocoa beans from Earth. As the show progresses, BoBoiBoy and his friends come across new allies and villains.

As in it's 2009 first ever trailer, characters were already released namely: BoBoiBoy, Yaya, Adu Du and BoBot (possibly what Ochobot was intended to be named and looked like), and there's Tok Aba's Cocoa Shop, a building and sells cocoa.

No.1 Rated Animation in Malaysia 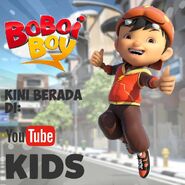