Black with a white streak (formerly)

BoBoiBoy is the main protagonist of the series of the same name and its sequel series, BoBoiBoy Galaxy. He is a young boy with the unique ability to manipulate elements with the help of his Power Band.

BoBoiBoy is a young boy who lived in the capital city of Malaysia along with parents. His father works as an ambassador. One summer, BoBoiBoy was sent to Tok Aba, his grandfather, on Rintis Island, where his adventure as a superhero began.

BoBoiBoy is an energetic individual. A natural-born superhero and leader at heart, he works hard to protect the world, and later the whole galaxy. Overall he is shown to be very friendly and kind throughout the series. He is courageous and doesn't hesitate to jump into battle to protect other people and the ones he cares about. BoBoiBoy repeatedly has shown to risk his life more than once just for the sake of others, even risking death. Throughout the series, although he can get stressed from his superhero life, BoBoiBoy has said and shown that he is more than happy to be a superhero and is shown in Galaxy that he's eager to help out others.

BoBoiBoy has a tendency to get annoyed by people or things but is good-natured at heart. Although responsible, typically shown during his time at school, he is also very playful and a bit of jokster. At times he is also a deadpan snarker, especially with Gopal's antics. Despite the heavy responsibility he has as Earth's superhero, he is still a child at heart and can easily be impressed or entertained by little things. In his spare time, he enjoys playing football and video games with his friends, especially Gopal. He has a good relationship with his parents and though enjoys his new life, he can get a little homesick sometimes.

However, his urge to do good and bring justice to those who deserve it can also get in the way of his personal life. This was evident during the BoBoiBoy the Movie, where he put his work above his friends, who get cross at him for constantly doing superhero work and forgetting about planned events. However, he learns that he needs to make time for his friends as well as do superhero work. In addition to his good traits, BoBoiBoy is notoriously forgetful and sometimes can overjudge his capabilities to do certain things, but means well overall.

When using his Elemental split, his different forms have noticeably different personalities, all possibly amplified components of BoBoiBoy's true persona. Lightning is short-tempered, serious and exceptionally fierce during battles (turns into a loner-type in Galaxy). Wind is the most cheerful and carefree of the original three Elements. Earth acts as the de facto leader, being the most calm, responsible, wise and calculating as the representation of BoBoiBoy's original personality. BoBoiBoy Fire is a jokester and excitable, but easily stressed and often careless (vengeful and violent in Galaxy). BoBoiBoy Water is relaxed and calm, but very lazy. BoBoiBoy Leaf, is naïve, air-headed, and has a child-like nature, mostly due to BoBoiBoy hitting his head when he gained the form. BoBoiBoy Light is as serious as Lightning, if not more so. He is the most powerful Element, which lends to his main flaw of arrogance, overestimating himself and sometimes underestimating the capabilities of his teammates.

The personalities of his second-tier Elements are similar to the first-tier, except that their most prominent traits have been taken to extremes. Despite their strong personalities, they are capable of working together when in battle.

BoBoiBoy is a young boy with brown eyes, light skin, and black hair that pokes out from under his cap. He continues to maintain these biological features as he ages although for some reason his hair becomes dark brown after the events of the movie and Galaxy.

Although rarely ever seen without his iconic dinosaur-like hat, it is shown that without it BoiBoiBoy has a white streak in his hair. It can be prominently seen on BoBoiBoy Fire in Galaxy, and was briefly seen in BoBoiBoy: The Movie.

He wears a white shirt under an orange jacket with long brown puffed sleeves that is zipped up. Pointy orange and white shoes, an orange dinosaur-like cap and brown pants. In the Extended Finale where he is seen at Rintis Island Primary School, he wears the outfit almost the same in the first season, however in Season 1, Episode 13, he wears a jacket with an orange vest and light blue pants. He's grown taller, and his hair has grown slightly longer too. However, in BoBoiBoy Galaxy, he's growing taller and his power band was upgraded.

At home, he wears an outfit which is almost similar to the one in the first season. However, his jacket has a hood and its sleeves are shorter and no longer puffed. He wears red and black sneakers with white shoelaces. At school, he wears the same outfit as the one in the Extended Finale. Also, he only wears one Power Watch instead of two on Season 1.

In Season 3, BoBoiBoy's outfit stayed the same save for the pockets of his jacket.

Some time has passed since the ending of the BoBoiBoy: The Movie, he has grown much taller, standing at a height of 145cm, and matured quite a bit. He wears a black shirt with elbow-length sleeves under a partially zipped orange vest with a prominent collar while donning a pair of blue jeans and a black belt. His new boots are black, white, and gray. Since the upgrade in the movie, he wears his upgraded Power Band over his short red arm-warmers. His cap maintains its dinosaur-like appearance with the spike along the top, albeit the "mouth" part is less prominent and there are less yellow spots. The zipper of his vest and logo on his cap are stylized to look like a "B".

In BoBoiBoy Movie 2, Boboiboy's appearance get a slight upgrade. He wears a partially zipped bright orange vest with padding on the outside while donning a pair of light blue jeans and a black belt.

In this season of BoBoiBoy Galaxy. BoBoiBoy wears a circular power watch and a partially zipped complete orange vest with yellow padding on the outside, a pair of light blue jeans with a black belt and grey boots.

BoBoiBoy's main superpower is his Elemental Forms ability, given to him by Ochobot in a form of a Power Band he wears with him almost constantly. With this ability, he can switch between these elemental forms, all of which have unique powers to control the different elements and use it to combat enemies and defend the world. In total, BoBoiBoy has seven different elemental forms, as well as a Second Tier evolution of each form. He can use a wide range of abilities with each form, with each form having their own advantages and disadvantages.

When in a pinch, BoBoiBoy has an ultimate ability called 'Elemental Split' in which he is able to 'split' and make copies of the elemental forms of himself. With this, he can use elemental abilities at the same time and the added benefit of having multiple copies of himself to fight.

In BoBoiBoy Movie 2, BoBoiBoy gained a new type of ultimate ability called 'Elemental Fusion' where he fuses two forms into a singular more powerful form instead of them.

In addition to having superpowers, over time, BoBoiBoy has started to get proficiency in doing things that do not require his powers. He had gained a certain amount of durability, able to take in ruthless attacks and still be able to get up at the end. He is also a decent fighter without his powers and has a lot of endurance. He is also quite intelligent for his age and knows how to properly take exams.

Although not seen onscreen, BoBoiBoy is able to play the bass guitar according to a character trivia.

Some time have passed since the events of the movie, BoBoiBoy is now living in peace on Rintis Island, but feels bored and unproductive due to the lack of need for a superhero anymore, since the aliens had now left Earth alone. He, along with Gopal, had suddenly been contacted by Koko Ci. After accepting Koko Ci's request for assistance to collect and protect scattered Power Spheres around the galaxy in an organization called TAPOPS, BoBoiBoy departs on a new space adventure.

BoBoiBoy confronts Retak'ka, an extraterrestrial villain who claims to be the original possessor of all of his seven elemental powers. After Retak'ka claimed four of the powers from him, BoBoiBoy heads to Planet Quabaq with his three remaining powers where he trains rigorously under Hang Kasa in order to become stronger. In the climax, BoBoiBoy not only reclaims his lost elements, but also hones his newfound Elemental Fusion to resoundly defeat Retak'ka.

After Retak'ka destroys TAPOPS Station, BoBoiBoy and his friends await their next step with BoBoiBoy in his mission to upgrade his elemental powers to third tier. Unexpectedly, an old enemy reappears with a new evil plan. 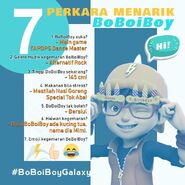 BoBoiBoy Wiki has a collection of images and media related to BoBoiBoy (Character). 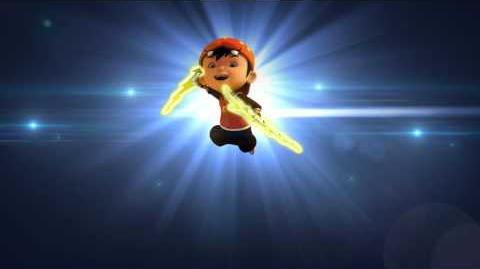 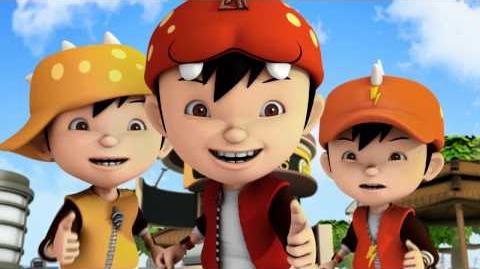