BoBoiBoy: Adu Du Attacks is the arcade & action Android video game based on BoBoiBoy series. It was created by 8elements Ltd, a games company which located at Hong Kong. The game has two version, the trial version (free) and the full version (must pay) with the price $0,99.

In full version, it was available 30 stage and 6 boss stage also earning power like potentials and elemental splits, which based on Season 1 episodes.

"Red alert. Attention everybody. Adudu is attacking Rintis Island again! As you all know, his mean plan is to steal Tok Aba's cocoa and therefore he sent his spaceship to Earth. To protect the valuable energy source, you must help BoBoiBoy defend Rintis Island and fight against all of Adudu’s gang."

"This is a fun, challenging and exciting shooting game for your mobile phone! Download BoBoiBoy: Adudu attacks! and fight along BoBoiBoy now!" 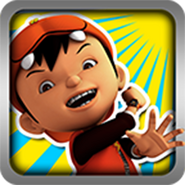