"Between Friend and Foe" ("Antara Kawan dan Lawan") is the 25th episode of Season 3 of BoBoiBoy.

The episode starts in the past, around when BoBoiBoy is leaving Rintis Island at the end of Season 1. Captain Kaizo’s spaceship arrives near a train station and beams Fang down to Earth, whose mission is to retrieve the Power Bands detected on Earth. He locates the gang's Power Bands in the distance via his mask. Kaizo orders Fang to keep his identity a secret, and use force to obtain the Power Bands if necessary, which Fang accepts.

Suddenly, the ship starts to depart and Fang realizes that they’re leaving him behind. Kaizo tells him he believes that Fang will take a long time to complete this mission as they don’t know who the bearers are. He cryptically assures him that he’ll return “when the time is right”. Although Fang is reluctant to be left alone, he has no choice but to accept the captain’s decision, and he heads to catch a train to Rintis Island.

In the present, BoBoiBoy Thunderstorm and Fang mutually end their battle. BoBoiBoy declares that he and Fang will not fight because they’re friends, much to Kaizo and Lieutenant Lahap's displeasure. Fang defends his action by reminding them that when they stranded him on Earth, BoBoiBoy’s gang were the only ones who were there for him. Lahap moves to punish Fang's insolence, but Captain Kaizo stops him.

BoBoiBoy assures Fang that they will defend him before Kaizo suddenly attacks them using Energy Fist. Fang blocks it with a Shadow Shield, but the punch's force is strong enough to shatter it and send them flying back. Instantly, Kaizo charges at them with super speed while Fang tries to counter with Shadow Fingers. However, Captain Kaizo slices the shadows to pieces, catching Fang off-guard long enough to trap him in Energy Shackles, immobilising him and spreading pain across his limbs and torso. Kaizo’s fury at Fang’s betrayal comes through when he demands to know if he has forgotten the captain's previous care of his subordinate. He reminds him that his mission was to retrieve the powers, not make friends. Fang submits a strained apology but it only triggers the captain’s unwavering intention to punish him.

BoBoiBoy transforms into BoBoiBoy Quake to strike Captain Kaizo with an Earth Golem, but the attack is easily blocked by an Energy Shield before the captain shatters the golem with an Energy Kick. One of the rock fragments hits Quake, leaving him in pain on the ground. Fang begs BoBoiBoy to stop fighting, knowing he can’t beat Captain Kaizo. Lahap confirms this, claiming Kaizo to be among the most formidable aliens in the universe based on the strength of his invisible force field. Gopal realises that’s how he, Ying and Yaya were barred from BoBoiBoy and Fang’s battle.

Kaizo proceeds to tighten his shackles’ grip on Fang, intent on making “Private Pang” regret his betrayal. BoBoiBoy, however, is filled with a new resolve to defeat Kaizo, insisting that his friend’s name is "Fang", not "Pang". He performs an Elemental Split with a new trio consisting of BoBoiBoy Earth, Fire, and Water, much to his friends’ awe and Fire’s delight at finally meeting Water in person.

Earth calls their focus back to breaking Captain Kaizo’s Energy Shield. They attack the shield simultaneously, but leave no impact. As the captain brags about the strength of his impenetrable shield, Water sends a giant Water Whale towards the shield. In awe of Water’s power, Fire insists they do a combo move with his Maximum Fireball.

However, both attacks collide before they reach the target, and the fireball evaporates the whale, to everyone’s disappointment. BoBoiBoy Water rages at BoBoiBoy Fire for ruining his attack. Fire apologizes and attempts another attack, but Water thwarts it in retaliation. The two elements childishly end up brawling.

Earth tries to get them to stop, but an impatient Captain Kaizo attacks them with Energy Push, making them merge back to BoBoiBoy. Kaizo believes that this only affirms that the Power Bands are being wasted on naïve children. Outraged at his presumption, BoBoiBoy transforms into Thunderstorm and attacks Kaizo, who dodges his Thunder Blades effortlessly. He blocks a blade with an energised hand before wielding his own Energy Sword. Gopal recalls that his sword is what defeated Ejo Jo in one strike. The shield and the shackles holding Fang are suddenly disabled, and he warns BoBoiBoy to be careful.

Kaizo engages Thunderstorm in high-speed sword fight, and Gopal applauds the captain’s great skill. As they fight, Yaya realises that the force field is gone, leading Gopal to deduce that Captain Kaizo must concentrate all his energy on his sword. Yaya and Ying rush in to save Fang while BoBoiBoy distracts the captain. Gopal tries to stop them just as they are struck with a plasma beam.

The beam is revealed to have come from Lahap. He drinks a toxic liquid, disgusting Ying and Gopal, and reveals that his power is turning toxic substances that he eats into plasma energy beams. He attacks with another beam, then with multiple Toxic Plasma Shots. Realizing that they cannot escape, Ying slows time around them.

In BoBoiBoy Thunderstorm and Captain Kaizo’s fight, Kaizo tells him to give up Ochobot and his Power Band because only the worthy ones can use the powers given by the Power Sphere. Thunderstorm argues that he needs the power to protect Earth, a desire which Kaizo mocks before shattering his Thunder Blades. The energy wave from the impact affects Ying's Power Band and deactivates her slo-mo field, causing the toxic shots to fall on her and Yaya and render them unconscious. Gopal manages to evade them by hiding in a barrel.

Captain Kaizo approaches the unconscious Thunderstorm and captures him with Energy Grip. He again tells him to surrender their powers and forget about Fang. Thunderstorm stubbornly insists that Fang is his friend, despite how he’s lied to them.

Meanwhile, Gopal challenges Lahap by throwing a rock at him and turns it into one of Yaya's biscuit before Lahap eats it. However, the biscuit’s immense toxicity produces a plasma blast so strong, that Lahap can’t contain it. Gopal realises his mistake once the blast directly hits Thunderstorm leaving him unconscious again, while Kaizo easily protects himself with a small shield. Yaya is too touched that Lahap loves her cookies to attack him.

Captain Kaizo interrupts and orders Lahap to destroy them. Lahap takes out a container filled with toxic waste and prepares to ingest it. Realising that his friends are too weak to defend against another powerful attack, Fang uses Shadow Fingers to steal their Power Bands and gives them to Captain Kaizo in an effort to stop them from getting hurt. He persuades him to forget about the Earthlings as they have completed their mission, and apologises again for his actions against him. Kaizo accepts his apology, but warns him never to disobey his orders again, lest he face the captain’s punishment.

The aliens move to leave, but BoBoiBoy grabs Fang's leg and pleads for him to stay because he’s their friend. Fang hesitates, but under Kaizo’s glare, he shakes off BoBoiBoy's grip and shouts that he isn’t their friend. The three aliens depart in their spaceship, leaving BoBoiBoy and his friends powerless.

With the battle over, BoBoiBoy’s gang return to Tok Aba’s cafe to treat their injuries, and lament their defeat at the hands of their strongest opponent. BoBoiBoy apologizes to Ochobot for losing the powers he had given them. Gopal suggests that he give them a new set of Power Bands, but Ochobot explains that he only has five different powers. Gopal and Ying feel scorned by Fang’s theft of their powers and believe that he’s an evil alien after all, but BoBoiBoy and Yaya defend Fang’s actions, thinking he had no choice but to obey his captain’s orders and only took their bands to stop Kaizo and Lahap from attacking them. Ying pities Fang for having to follow aliens like them.

Tok Aba insists that if they still view Fang as a friend, they should go and rescue him from Captain Kaizo. However, they feel they can’t do anything because they are no longer superheroes. Upon hearing "superhero", Ochobot gets an idea.

In a large safe-room on Captain Kaizo's spaceship, Kaizo places the four Power Bands into a secure pod. Fang says that their mission is completed, but Kaizo disagrees, ordering Fang to give up his Shadow Power Band as he isn’t worthy to wield two powers at once. Fang stares at his Power Band with a heavy heart and, after reminiscing how he obtained his shadow power from Ochobot, relinquishes the band to his captain. After that, he contacts Lahap about their statuses and Lahap replies that everything is on set and they are ready to move.

Suddenly, their spaceship is attacked by another spaceship. Captain Kaizo and Fang immediately go to the Control Room where Lahap Received a transmission from the attackers. The culprits are revealed to be Adu Du as Supervillain Jero-Jero. BoBoiBoy appears on the screen too, demanding Fang to be released, much to Fang’s surprise.

A flashback to the Cube Fortress a few hours ago, reveals that BoBoiBoy’s gang asked them to help save Fang. Adu Du refused at first, but after they persuaded him to believe that Fang is an evil alien, he agreed since Supervillain Jero-Jero’s mission is to aid all evil aliens. 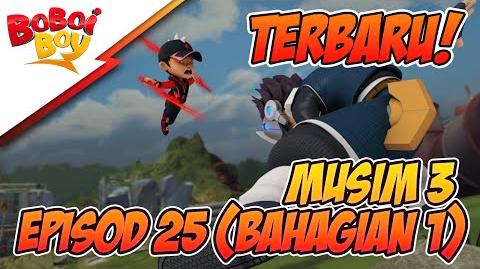 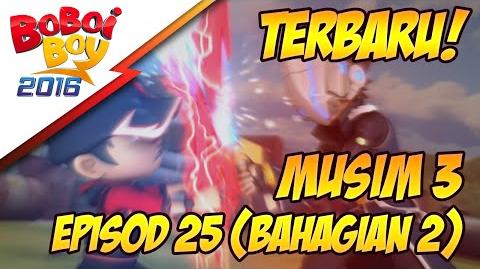 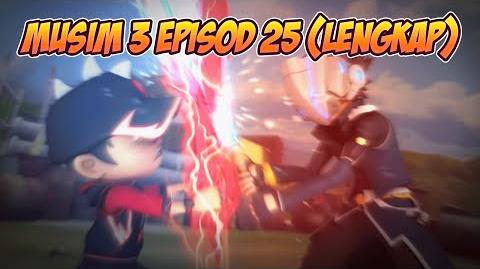