Aunty Yang is a character in BoBoiBoy Galaxy and is Ying's mother.

Sometime before the start of BoBoiBoy, Aunty Yang settled on Rintis Island, with her grandmother and had her own child, Ying.

Aunty Yang made her first appearance in Episode 16 of BoBoiBoy Galaxy, where she happily welcomed her daughter back from space, along with Mrs. Wawa, Yaya's own mother. She entices the children with her food, before she gets into a small scuffle with Mrs. Wawa over who's cooking is better, before getting dragged away by Ying to prevent a fight breaking out.

Aunty Yang is a loving mother who was obviously pleased to have her daughter return, even for a brief moment, from her work in TAPOPS. Like her daughter, Aunty Yang also has an incredible competitive streak, leading her to often get into quarrels with her close friend, Mrs. Wawa, Yaya's mother. 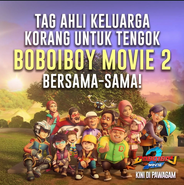