After successfully obtaining the Crystal Salt and Holy Chili, BoBoiBoy and friends rushed to the next material location.

But there is a surprise that awaits the arrival of BoBoiBoy at the top of the sky high Coconut Tree![2]

At Cube Fortress, three days before BoBoiBoy arrives on Planet Rimbara, Adu Du has successfully created a watch device used to replicate every teleportal opened by Ochobot from a chip installed in his body not long ago. After receiving his first signal detected around, Adu Du along with Probe open the first teleportal to the destination, but they do not arrive on a planet, but in space near Captain Kaizo's spacecraft .

Going into the present, while Fang is flying the spaceship, BoBoiBoy, Gopal, Ying , Yaya, and Qually are making plans to acquire two more ingredients for Tom Yam Sakti, namely Sky Coconut and Blue Apiru. Ying suggests that they split up again, but Qually suggests that they all focus on finding one ingredient before finding another. BoBoiBoy agrees with Qually's suggestion.

The spaceship approaches the Sky Coconut Tree area, where Qually explains that the top of the tree is the only place to find the Sky Coconut Fruit. BoBoiBoy asks Fang to raise the ship to the top of a tree, but a sudden engine failure forces Fang to make an emergency landing with Yaya's help to avoid crashing. So Fang had to sit down to repair the ship while the others climbed the tallest tree from the site to the top.

Before repairing, Fang extended his hand to the hull while expressing words of pity to "Lily". Gopal, who was walking behind BoBoiBoy, was broke into laughter because he heard Fang calling the ship by the name of Lily.

Arriving at the base of the Sky Coconut Tree, Gopal felt scared because he had to climb such a high tree. Qually said, there is no other option because the Sky Coconut only grows on the top of the tree closest to the sun. BoBoiBoy remained enthusiastic to embark on a tree-climbing journey, but just a step further, they met a creature in the form of a stocky, green-haired orangutan, wearing a yellow hat and settler-like clothes, and carrying a cane in the form of a kais on his back.

BoBoiBoy explains that he was sent by Guru Gaharum to get the Sky Coconut. Professor Utan was surprised to hear Gaharum's name, then told the story of Gaharum's past who loved to cook Sky Coconut to be used as food for King Balakung, in fact he also planted its seeds to grow into trees all over the Planet Rimbara. Regardless, Professor Utan is relieved to finally hear about Gaharum since King Balakung's departure, so he is willing to fulfill BoBoiBoy's request ... only after filling out the permit application form for picking Sky Coconut which usually takes two weeks to process, but this time it was approved-immediately simply because of Gaharum's request.

BoBoiBoy and Gopal are horrified to see how much paper needs to be filled out, but Ying comes forward to do Writing Speed to fill out the entire form as quickly as possible, but that even takes 40 minutes. Afterwards, Professor Utan ordered them to hand over the form to the office counter at the summit before sunset, and even more shockingly, if it was too late, they had to wait until next year as the Professor himself was going on holiday.

The Rimbara sun was already in the evening, so BoBoiBoy's gang had to move immediately. Ying puts the form in Gopal's hand then does a Speed Run along the trunk of the tree, while BoBoiBoy turns into a BoBoiBoy Thorn and tied the Thorny Wines to be linked to the top of the tree to lift himself up. Gopal complains not everyone can climb a tree quickly, then he realizes Qually disappears again. Yaya thought Qually had climbed first, and flew while lifting Gopal up with Gravitational Lift.

Arriving at the top of a tree, the team set foot on a spacious platform with a research center building. They walk to the center of the platform to find the Sky Coconut fruit growing on the top of its tree, but Ying reminds Gopal to submit the form as the sun is about to set. Just half way towards the counter, Gopal is stopped by a loud bang made by the landing of Adu Du and Mega Probe who are content to find them after three days and three nights in Rimbara solely for the sake of the Power Sphere.

BoBoiBoy says they are not here to find the Power Sphere, but instead to pick the fruit, but Adu Du doesn't believe it because the shape of the fruit is round as if it were a Power Sphera. Gopal tries to intercept them from silence to submit the form, but is spotted by Adu Du who tells Probe to fire the Rocket Launcher at him. Fortunately, BoBoiBoy turns into BoBoiBoy Blaze and throws Fire Balls to buffer Probe's shots. Ying and Yaya attack Adu Du with Gravity Acceleration, but Adu Du repels with his Electric Rod. Ying stalks Adu Du in the back and performs a High Speed Somersault Kick to fly Adu Du's rod, then Yaya inflicts a Solid Punch on the floor.

Ying and Yaya summon Adu Du to surrender, but Adu Du refuses and launches an electric shock on the platform floor to drop Ying and Yaya to the ground, while Blaze and Gopal are stopped by a Mecha Probe with a Destroyer Laser shot, but luckily Qually appears out of nowhere, buffering shot with his shield pan. Blaze told Gopal to submit the form while he switched to Thorn back to delay Adu Du and Probe with Thorn Swipe.

Mecha Probe releases a Double Rocket Launcher, but BoBoiBoy uses triple split into Blaze, Thorn and Cyclone to buffer Probe attacks with Fire Balls, Ensaring Wines, and Cyclone Shield. However, a rocket headed towards Gopal and formed a hole in the platform, causing Gopal to almost fall, before being stopped by Thorn weaving a Mat into the hole. Gopal survived but was in pain due to the thorny mat. After missing this attack for a period of days, Blaze once again released Maximum Fireball to drop Adu Du and Probe from the platform.

After the fight, Yaya and Ying reappeared with a Gravitational Lift, while Qually handed over the form at the counter on behalf of Gopal, then was entertained by Professor Utan who was surprised to see the damage around the platform as a result of the match. BoBoiBoy was surprised to see Professor Utan until the beginning, and the Professor also said that he took the elevator which was not announced before BoBoiBoy's entourage climbed. Finally, Professor Utan approved the application and picked a Sky Coconut to give to Qually.

Suddenly, Fang appears on the platform and warns friends not to hand over the coconuts to Qually because he is the one who sabotaged their spaceship, with Qually's shovel thrown in the engine system as proof. So, Qually dropped the Black Pepper Bomb on those who pretended to be his friends and then fled the Sky Coconut with his spaceship. Gopal tries to discuss the matter, but Qually pushes him away before leaving. 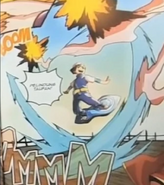 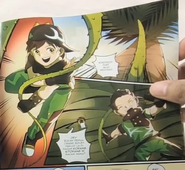 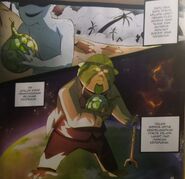