Animonsta Studios Sdn. Bhd (also known as Monsta) is a Malaysian animation company headquartered in Cyberjaya, Sepang, Selangor, in the Kuala Lumpur metropolitan area[1]. It is an animation content developer bringing fresh content with good values for the universal market. The products have Universal content but with local Malaysian touch through bringing entertaining stories and memorable characters.

It was founded in September 15, 2009 along with the production of the series by Nizam Razak, Kee Yong Pin, Safwan Karim and Anas Abdul Aziz whose the former creators of Upin & Ipin.

Animonsta Studios is an animation content developer bringing fresh content with good values for the universal market. The products have Universal content but with local touch through bringing entertaining stories and memorable characters. The developers specialise in Feature Films, TV Series, Merchandising and other related products in the Intellectual Property business.

The founders of Animonsta Studios have industry experience in creating blockbuster 3D Animated Feature Films and Television Series. With the combined knowledge and experience gained previously, they have set up Animonsta Studios with aims to bring universal content with a local touch to both Local and International Market.

Their first product, BoBoiBoy is about an adventure of BoBoiBoy and his friends fighting against aliens who are invading earth for coffee. BoBoiBoy is a television series (26 episodes x 11 minutes) which will later be branched into a full feature film for theatrical release. The show is targeted to children and teenagers though written that is suitable for the whole family to watch together.

An adventure of BoBoiBoy and his friends fighting against aliens who are invading earth for cocoa beans.

Imagine a future where aliens have invaded earth in order to harvest the earth's cocoa beans supply. Imagine that the only hope for humanity lies within a little boy named BoBoiBoy who wields an alien technology that transforms him into an amazing super hero. Join BoBoiBoy and his friends as they go on an adventure and battle against ridiculous aliens who have abnormally square shaped heads and a crazy addiction to cocoa beans. Though they are superheroes, they are still kids who always find a way to have fun and play games whilst upholding justice and doing good.

Animonsta has collaborated with TOMY, a major global toy company. Animonsta is also discussing with TOMY on a toy deal for BoBoiBoy Galaxy, a re-brand of the current BoBoiBoy series.[2] 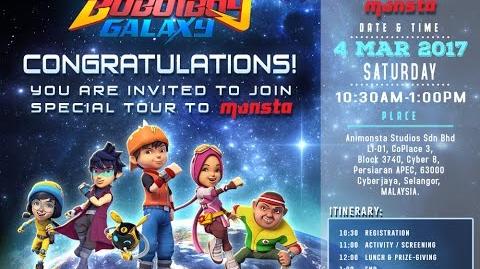