Ancient Kadruax Tribe! [1](Puak Purba Kadruax!) is the 8th issue of BoBoiBoy Galaxy (Season 2). It is postponed to a new date due to Covid 19.

After confronting hordes of tumbosaurs on the Planet Kadruax, BoBoiBoy and his friends try to escape in order to track down the very valuable Power Sphere PasuBot.

Yet another surprise awaits them in the Wilderness of Kadruax, which can make their plans a mess!

Papa Zola and Ochobot try to fly the MYS Kebenaran spaceship out of danger, but the ship's engine is clogged with creeping roots from a tree monster. They had to survive by closing the windows with shutters so the monsters wouldn't enter, and Ochobot sent an emergency message to BoBoiBoy.

Meanwhile, BoBoiBoy, Gopal, Yaya, and Ying are hiding in a log falling from a tree monster. Ying researches in the tablet and finds the monster is not in the database; Gopal suggests that the monster be named "Tumbosaur" because it looks like a mixture of dinosaurs and plants. BoBoiBoy asks if PasuBot is still being detected, Ying replies it came from the north, while Gopal urges to cancel the mission.

Unfortunately, a horde of “Tumbosaur” monsters managed to track down BoBoiBoy's gang and break the wood. BoBoiBoy immediately turns into Quake and attacks with Quake Punch to repel the monster, assisted by Yaya and Ying with Gravity Push and Speed Kick respectively. Gopal, on the other hand, due to the Food Transformation not being effective on the Tumbosaur, was almost devoured by a Tumbosaur, but he stumbled upon a wooden club and fought back.

Suddenly, a loud banging sound was heard, making the Tumbosaur monster stop and retreat. The quake looked through the crevice of the wood and found another much larger Tumbosaur, resembling a four-legged Triceratops, coming to smash a wooden stick until it rolled over! Quake protect friends by producing Earth Protectors so they land safely.

However, the team has not yet survived the Tumbosaur threat. Ying pointed toward a bridge formed of fallen trees that crossed a high canyon. Just half way across, the four of them were surrounded by the appearance of Tumbosaurs like Tyrannosaurus rex appearing in front of the road, and Tumbosaurs like Triceratops chasing from behind.

BoBoiBoy performs an elemental split consisting of Thorn, Thunderstorm and Solar. Thunderstorm helps Yaya who fights Tumbosaur Triceratops while Thorn attacks with Ensaring Wines to bind the mouth, hands and feet of the Tumbosaur T-rex in front, but it breaks the bond with ease and continues violently. Solar fires a Solar Shot at the T-rex, but it turns out to only amplify the monster (because the plant receives energy from sunlight).

The adult T-rex tumbosaur stepped on the bridge, causing Gopal to bounce into the air. Yaya releases a Gravity Float so that Gopal doesn't fall, while Ying, Thorn and Solar cling to a bridge branch to avoid slipping towards the Tumbosaur T-rex's mouth. The T-rex tumbosaur advanced on the bridge, causing the bridge to break and fall into the canyon, and Ying, Solar, and Thorn also bounced. Ying and Solar try to summon their respective powers but are hit by fragments of the bridge until they faint; Thorn bind them with Thorny Wines, and make a Parachute Leaf (with adjacent leaves) to buffer their fall.

Thunderstorm looked down, breathing a sigh of relief after witnessing the anxious scene, but reminded Gopal to help him and Yaya fight the Tumbosaurs on their side. Thunderstorm pulled out Thunder Blade and rushed towards Yaya, but stumbled on the creeping root that was hanging and dragged him from behind, causing both of his swords to fall out of reach. Gopal and Yaya were also arrested and tied up once, causing them to hang from a tree.

Suddenly, the horde of Tumbosaurs stopped and turned back to the tree. Yaya concludes that Tumbosaurs are only active during the day when there is sunlight, and rest at night. Thunderstorm, Gopal, and Ying try to escape from the creeping roots, but they are greeted by a group of human-equivalent beings wearing wooden masks and leaf costumes, chanting repeated cries that sound like "ja ba ja ba".

Gopal worries this is the tribe of natives eating people as narrated by Qually, but Yaya calms down and persuades Thunderstorm to greet them. Thunderstorm tried to speak "jaba jaba" with the natives, but was reciprocated with rudeness and "ba ja ba ja". Yaya wonders what the aboriginal words mean, while hoping for the best for the Ying group.

Meanwhile, Ying and Solar wake up from fainting and realize they are boarding a leaf boat formed by Thorn himself, only his barbed boat makes Solar less comfortable. Ying said if they continued to follow the river they were walking on, they would continue to reach PasuBot's location. Thorn hopes to reunite with Thunderstorm's group there, but Solar is worried because it is difficult to contact them.

Thunderstorm, Yaya, and Gopal were taken to the aboriginal village, then seated at the dining table. Gopal is afraid this is when they will be eaten, but the villagers feed them fruits, making them calm down. They were greeted by the appearance of Adu Du and Probe who dressed like villagers, came forward to explain to the three of them that this Jaba Tribe does not eat people, instead adopts a vegetarian diet.

Regardless, Adu Du and Probe repeat their desire to snatch the seeds of Oakuat and Power Sphere PasuBot after learning that BoBoiBoy wants to get the items. Probe snatches the Oakuat seed from Thunderstorm's pocket which is supposed to be the Oakuat seed to be given to Adu Du, and Adu Du intends to eat the fruit himself to release his own latent power. Gopal attacks Adu Du, but is slapped by Probe for insulting the "Jaba Chief", making everyone wonder.

Adu Du explains that they came to Planet Kadruax to break BoBoiBoy's mission but were threatened by a Tumbosaur monster until they were rescued by the Baja Tribe and appointed their chief. Yaya asks how, but Adu Du keeps it a secret, then he goes out with Probe to hunt down PasuBot and leaves the three of them bound in the village. The villagers praised their chief with a shout of "Baja Baik" and planted Thunderstorm, Yaya and Gopal with their heads in the ground. Yaya thinks they were treated like this to be fed to Tumbosaurs, making Gopal even more scared and anxious.

Meanwhile, Ying, Solar and Thorn are getting closer to the source of the Power Sphere signal, descending from the canoe to climb the stairs that lead into an abandoned, dilapidated and tree-overgrown pyramid. Thorn can't wait to get the third level Elemental Power, while Solar warns to quickly complete the mission for fear of becoming forgetful if split too long. 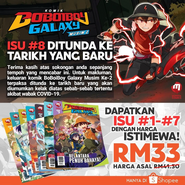