Adu Du's Return to Evil (Adu Du Kembali Jahat) is the 13th episode of Season 3. This mark the returns of Adu Du's evil side and the debut of Robot Pango.

At morning, BoBoiBoy was having breakfast with cereal and milk. Suddenly, Tok Aba shocked him and confused of his grandson's sadness. BoBoiBoy tell that he was worried about Adu Du that now becoming evil again. Then, his watch was beat and BoBoiBoy was went to Rintis Island Primary School. At school, again BoBoiBoy feel sad about Adu Du. His friend support him and advice to let it go and focus on the saving world.

In Cube Fortress, pain Ibu Bu plan to go home to Ata Ta Tiga to continue her boutique business. Adu Du was worried about his mom, but she said she was happy that now Adu Du were evil again and go again with his real purpose on Earth. Then, she present 2 gift: Jaja Bear, the evil bear and Plutonium Credit Card, a card that give the infinite luxury. Adu Du was little bit reject the card, but Ibu Bu force him to use it because of his life now on. Then, he accept it with exception that this is his time to use his mom's help.

At school, Papa Zola open the lesson with a suprise. He give the surprise of Math Shock Test. All of the student was worried and in panic. Before it start, Papa Zola was waiting Abdul Dudul that said as his pride pupils. Suddenly, Abdul Dudul was coming late and lied that he help a person. BoBoiBoy and Gopal put suspicious that Adu Du was evil. But, Adu Du was lied that say that now he was a good person. The exam was begin and have a small problem such as Yaya and Ying's rivalry. Ying think that Yaya want to cheat her. To avoid that, Ying use Speed Writing, but mad Yaya released her gravity power and cause the chaos in the class. BoBoiBoy calm Yaya and the class was back to normal. Adu Du then start his mission by contacting someone with his walkie talkie. When Gopal see that, Adu Du quickly put his walkie talkie on Gopal's table and blame Gopal. After that, Adu Du laugh evily.

Adu Du and Ibu Bu contact Bago Go to order some weapon. When Bago Go see Adu Du, he remember the battle on the moon when he was stepped his brother after taking over the MegaBot ScamBot while the other was play with the luxury. Bago Go doesn't want apologize, but Ibu Bu show her Plutonium Credit Card and shock Bago Go. Then, he was start the transaction and Adu Du decide to bought Pango Robot to defeat BoBoiBoy.

Robot Pango create chaos by stealing many things such as charity box, canteen money, lamp pole, trash bin, soccer goalpost, Papa Zola's car tire, and basketball ring. BoBoiBoy, Gopal, and Fang wanted to out, but been prevented by Papa Zola because they must continue the exam. BoBoiBoy then split up and BoBoiBoy Cyclone and BoBoiBoy Thunderstorm leave BoBoiBoy Quake for battle while he was doing the exam. BoBoiBoy Cyclone and Thunderstorm begin their battle against Pango Robot. 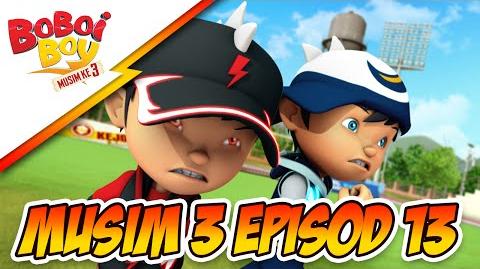