The Arrival of Adu Du's Mom

At 7 AM in Cube Fortress, Adu Du wake up and sing Wake up and Be Happy (Bangun Pagi, Senang Hati) with Probe. After that, he feel very sad because he haven't done any activity after become good by BoBoiBoy's motivation. Probe then suggest him to have some hobbies. They then go fishing in the pond.

At Tok Aba and BoBoiBoy's Kokotiam, BoBoiBoy arrive and get tired because of his hen house building job for the Canteen Lady. Suddenly, Gopal called him and said that Mr. Kumar's ice cream stand was on fire. Tok Aba then give BoBoiBoy 3 things such as mask, drinking bottle, and lunch box. He directly go to the place and his appearance makes people laugh. Adu Du called BoBoiBoy, but he choose to save people.

Suddenly, Adu Du's mother, Ibu Bu come to and clean up Adu Du's house. She's worried about his son's (which she call Bubuchuk) life. She pretend to help him, but Adu Du choose to live himself and tell his mother that now he was a good person because of BoBoiBoy's motivation. Ibu Bu becomes angry and go to Tok Aba and BoBoiBoy's Kokotiam to meet BoBoiBoy, the boy who turn her son into good side.

The fire was gone and Gopal got a cough. Yaya and Ying suggest Mr. Kumar to be more careful. Suddenly, Ochobot calls BoBoiBoy to come to the shop because of Ibu Bu's madness. Adu Du's mother was questioning Tok Aba about BoBoiBoy and want to give him lesson. The heroes finally arrive and Ibu Bu directly interrogates BoBoiBoy. Then, she attacks them with her Lipstick Laser Gun and create chaos. BoBoiBoy then split up and fight against Ibu Bu. Then, Ibu Bu change her lipstick to saber, but blocked by BoBoiBoy Thunderstorm's Thunder Blade. She almost hit Gopal, but BoBoiBoy Quake, create Earth Wall to defend his friend. Then, she switch again to whip and scared Gopal. Finally, she threw her Make Up Blow Up Kit, but BoBoiBoy Quake creates Earth Pillar, but suddenly his gloves hit her gut and injured her. Seeing that, Adu Du become mad and suddenly turns to the evil side and wanted to seek revenge. Ibu Bu smiles vilely seeing his son now become a part of the evil side again. 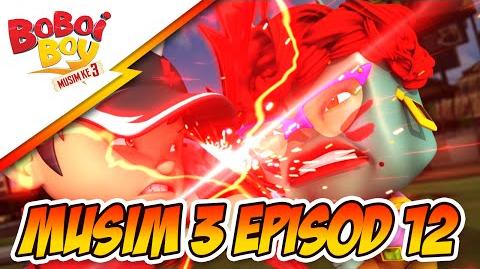