BoBoiBoy, Yaya, Ying, and Gopal go to a dangerous planet where their Toughness Test is held. They must defeat Team A and retrieve the Power Sphere hidden there.

The episode begins with Admiral Tarung allowing BoBoiBoy’s gang to take the Toughness Test as they are clear that the consequence for failing is expulsion from TAPOPS. The test’s location is Planet Volcania, a planet filled with active volcanoes and molten lava rivers. Koko Ci explains that it's all a simulation in which their task is to retrieve a Power Sphere atop a volcano. Gopal expresses relief that it's only a simulation, drawing a sly grin from Tarung.

There are two teams, A and B, involved, Team B being BoBoiBoy’s gang. Team A remains unnamed but are revealed to already be on Planet Volcania. Ochobot teleports Team B to the planet, and their progress is monitored by a drone-like robot that Tarung sends after them.

As they take in their new surroundings, BoBoiBoy spots the volcano where the Power Sphera is located in the distance. They flee from erupting gas geysers and reach a lava river at the volcano base. Yaya uses her gravitational powers to lift some rocks protruding from the lava so BoBoiBoy and Gopal can get across. Unbeknownst to the others, Fang notices two shadowy figures in the distance and slips away to follow them instead.

Gopal is about to jump across but doesn't see the lava about to erupt under him. BoBoiBoy pushes him out of the way and over to the other side, getting burned in the process. BoBoiBoy's Power Band glitches after coming into contact with the lava, allowing Tarung to reveal that although the tests are usually simulated, this environment is real. He invites them to drop out and fail if it's too dangerous. After chiding Gopal for wanting to quit, they realise Fang is missing. Tarung explains that Fang is already ahead of them, so they continue on to the volcano’s summit. They find the Power Sphera, but are ambushed by Fang. He reveals that he is in fact, a member of Team A—not Team B—and that A’s goal is to prevent B from retrieving the Power Sphere. Fang introduces his other two members he saw earlier as Sai and Shielda, the former demonstrating his skill by throwing his shield to shatter several rock formations and recalling it like a boomerang.

His skill amazes BoBoiBoy and Gopal, their behavior only making all of Team A dub them as weak and easy targets. Outraged by Fang’s betrayal, Yaya and Ying attack Team A, only for Shielda to block, absorb and reflect their attacks. Koko Ci attempts to warn them about Shielda's power but Tarung interrupts and scolds him for exposing the information. Gopal discovers that Koko Ci was telling the truth and that Shielda’s shield can deflect both physical and verbal attacks.

Ying is injured by Sai's shield while distracted when trying to help Gopal. Yaya becomes furious and lifts up all of the nearby rocks to hurl at Sai and Shielda, which they defend against with their shields. Ying convinces BoBoiBoy to leave them and get the Power Sphere as soon as possible to end the test. BoBoiBoy transforms into BoBoiBoy Wind and flies towards the volcano, pursued and attacked by Fang on his Shadow Falcon. Shielda gains some ground on Yaya despite her relentless attacks and manages to knock her out of the air. Sai's shield, fast enough to be unaffected by Ying’s slow-mo field, collides with the ground, creating an explosion that knocks out both girls. Wind and Fang are shocked to see them defeated, the latter requesting that he surrender so that they won’t get hurt anymore. As Fang causes Wind to crash into the volcano floor, Koko Ci implores Tarung to stop the test, but he refuses.

Sai and Shielda show BoBoiBoy that the rest of Team B has been defeated. They decide to finish him too, but Fang insists that what they have done is victory enough, making them mock his sympathy towards the “weak” Earthlings. Urged to prove who are the weaker ones, BoBoiBoy finds the strength to stand and suddenly transforms into BoBoiBoy Fire. He viciously attacks Team A and dodges Sai’s incoming shield. While he’s distracted, Shielda slams him with her shield into a wall as Fang realizes they are going too far and yells for them to stop. However, Fire punches it away and releases a punch that Team A is unable to dodge.

The rest of Team B recover in time to witness the fight as the volcano begins to quake. Koko Ci realizes that the volcano had become unstable due to BoBoiBoy Fire's attack. As Yaya and Ying go to the Power Sphera, Gopal begs Admiral Tarung to abort the test as the volcano is about to erupt.

Fire laughs victoriously and asks Team A who the weakling is now. Fang and Shielda yield, but Sai throws his shield at full force towards Fire—who effortlessly dodges it—then diverts its direction to hit him from behind. Amazingly, Fire catches the shield with a single hand, ignites it and hurls it back at Sai. Before it reaches him, a teleportation portal opens and it turns out that Tarung stopped the shield with his teeth. Tarung announces that the test is over, relieving Team A. Fire argues that Team A has gone too far before Tarung and Ochobot help him to calm down to revert back to normal. More rocks fall in the area so Koko Ci calls out to Yaya, Ying and Gopal. Everyone enters the portal and makes it safely to TAPOPS Space Station just as the volcano erupts, sending out a shockwave that disables the camera droid left there.

BoBoiBoy apologizes to Team A for not being able to control himself. They also apologize and admit they went too far. Sai praises BoBoiBoy’s outstanding combat skills. Tarung on the other hand scolds them for failing to retrieve the Power Sphere, meaning they now face expulsion. Gopal interrupts and reveals the Power Sphere that they obtained thanks to Ying's plan. The episode ends with Tarung, shocked and elated, proclaiming that BoBoiBoy and his friends have passed the TAPOPS Toughness Test. 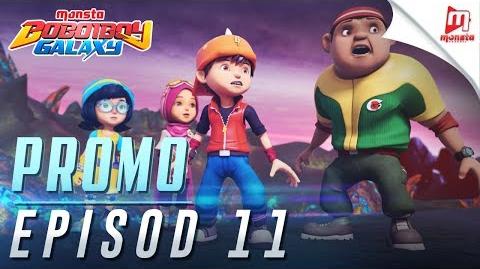 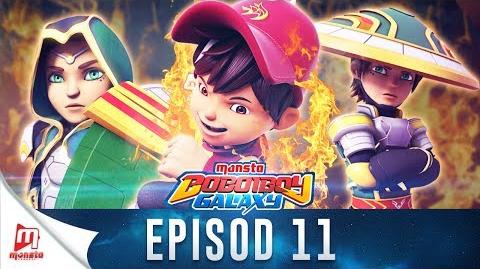